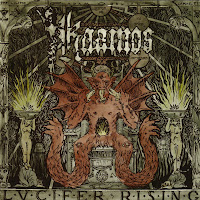 Some bands were far ahead of the curve when it comes to the revival of the classic Swedish death metal tones (circa Entombed, Dismember, Grotesque, etc). Kaamos was one of them, forming in the late 90s. Their lineup has featured members of Serpent Obscene, Revokation, and Repugnant. Lucifer Rising is their second full-length, following the self-titled debut of 2002, and the stronger of the two, due to both the increased production and the superior songwriting. But the style does not differ greatly: grinding guitars spew old school evil, wild leads explode forth against the ballistic rhythms, and some of the vocals are layered in a Deicide fashion, with grunts and snarls often working in tandem.

Lucifer Rising is a ripping good time, from the churning mass of its opener "Black Revelation" to the doomier tones of the closing instrumental "Ascent". The band operates well at different tempos, though most of the record is mid to faster paced. "Theriomorphic Pandaemonium", "Inaugurating Evil", and "Myserious Reversion" are choice cuts from the album, each a dark entry into the encyclopedia of Swedish crimes against humanity. Not every track had me raging as hard as the next, and the band's riffs aren't necessarily as catchy as some later revival bands (Bloodbath, Tormented, Demiurg, etc), but definitely fit for fans of any of them, especially Ribspreader or Paganizer. Simply put, if you long for that early sound with its crushing tones and overtures of doomed oblivion, this band will not fail you.