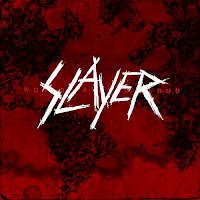 It's been 11 years now since Slayer screwed the pooch and released the abominable Diabolus in Musica. In the interim, we've gotten a pair of albums that, while not a total bust, were largely forgettable when compared against this band's body of 80s work. So three years pass after Christ Illusion, and the buzz is mounting for World Painted Blood, Slayer's 11th full length release. How does it stack up?

Unfortunately, there is no simple answer to this question. World Painted Blood is by and large a thrash metal album, and I for one am grateful to hear it. But it's not a very good thrash album...it exudes none of the menace or aggression of their many classics, and part of that is a product of the album's production. Tom Araya still sounds quite fierce, but the guitars have a different, crunchy sound to them. This isn't to say they sound bad, but there is a sterile feeling to the album which often scored a few yawns while I was listening. The album does have a few blistering tracks, like "Unit 731" and "Hate Worldwide", which are certainly as explosive as anything else the band has produced in nearly 20 years. "Playing With Dolls" is an interesting track, which teases with some clean vocals and melodies before adopting some chugging, old school Slayer grooves and, well, 'bounce' like lyrics. But I found most of the other tracks to be rather ho-hum for Slayer, pleasant enough to listen through but creating no compulsion to replay.

Eclipsing our reason
Whipping burn
In high imitation
Scream for an act in vein
All of these cuts
Bled out hopelessly
Now I'm an act of rage!

To tell the truth, I'm not a whit disappointed by the album, because I have expected little to nothing from this band for years. Musically, the band shows they still have the chops to set themselves on fire. The sporadic leads are still in place, the lyrics are dark, the tone of the album vaguely summons forth nostalgia for Seasons in the Abyss. Of the 11 tracks and 40 minutes, there are about 10-15 minutes where I was clenching my fists and admiring the threat this band can generate. The rest? Meh. I doubt many of these tracks will be making their setlist in the years to come.

Highlights: Unit 731, Hate Worldwide, Not of This God

Verdict: Indifference [6.5/10] (that's why it's become my obsession, to treat God like an infection)