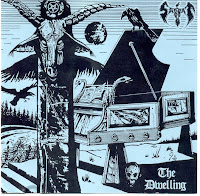 The Dwelling is an anomaly amidst the massive discography that is Sabbat's career; a single, hour long composition that weaves a solitary tale of horror. It's an outstanding achievement for an already impressive band, and it remains my single favorite album from these Japanese deviants. The tale itself is not quite a masterpiece, but it manages to include just about every occult metal meme needed: witches, rituals, damnation, you name it, the song covers it.

I'm a collecter of Death mask,
The greatest artist
MY sinful creation which is not created by god's,
But sometimes you gaze into me, laughing into me,
Harmonies from the inferno,
Melodies from hell to hell

"The Dwelling - The Melody of the Death Mask" is a long trip into the shadows of classic horror, given breath by the piecemeal Engrish of Gezol's inner demons. The use of piano and multiple vocals is one of the few traits that distinguishes it from their other work, but much of the album is traditional, black thrashing speed akin the band's other full length albums. Aside from the grating snarls of Gezol's, there are all manner of ghostly voices, which at first might seem silly, but actually imbue the work with a great deal of character (and a little Mercyful Fate-King Diamond eeriness). The album is loaded with great riffs, haunting atmospheric elements, and quality leads, but to point out specific locations would rob you of listening through in its entirety, so I'm not goint there. But the album ranges from the momentum of the band's faster speed metal style, to a traditional doom and gloom.

This is the perfect album for a colder autumn night, sitting in your chalk pentagram with a cup of aromatic tea, candles lit about you, a breeze slowly fanning their flames, perhaps naked, perhaps naked with a beautiful girl (or guy). You can take almost any old horror film, silent or not, turn off the volume, and play The Dwelling instead. You will discover many terrors in the subtext.
It is one of the albums I most associate with personal nostalgia for the Halloween season, and the most depth you are likely to ever experience from Sabbat.