I'm not well versed in the films of Ernest Dickerson. I've vaguely remember seeing Bones (the Snoop Doggy Dogg horror flick...) and Demon Knight, which were pretty lousy, and possibly a few of his TV episodes (Dexter, Stargate Universe, and The Wire), which weren't all bad. Nonetheless he is at the helm for the 3rd episode of Masters of Horror, season 2.

The V Word is a fairly simple vampire premise about a pair of teen boys who decide to go see a dead body at the local funeral home, where Justin's relative works alone on the night shift. They happen to arrive the same night a grisly vampire has shown up and killed the caretaker. Somehow, even though they let themselves in, the doors are locked and they cannot escape. They run into the vampire, Mr. Chaney (played fiendishly by Michael Ironside), as they are seeking another Exit. One of the boys is turned, the other escapes to his home, where his friend turns up and...well, you get it.

This is a pretty weak episode for Masters of Horror, probably the worst I have seen up to this 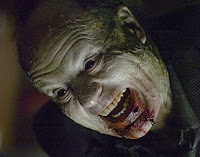 point. The video game references make it feel hashed and cheap, and I'm sorry...Doom 3 doesn't have point scoring or an infinite blood supply. Michael Ironside is great, as usual, but he has nothing to work with here. I did think the film had a dark, appropriate mood for its subject matter. This is no Twilight sissy shit, it's a pretty gory film. Full vampires are carnal, savage beasts in this universe. But it's just not ominous enough, even when Mr. Chaney is revealed to be a vampire pederast. One of the boys goes up in flames, the other does a Blade impersonation on the way to New York. Ooooo....scary.

The V Word sucks. However, since this has the best decapitation by Sawzall ever featured in a vampire film, I am awarding it an extra 1/2 point.