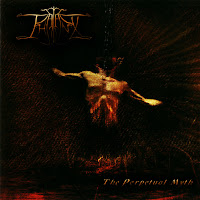 Recently I reviewed the debut EP of a young Australian band known as Eternal Rest, and now I've been introduced to another talented upstart from Queensland known as Phalanx. The six tracks on this Perpetual Myth EP may not have bowled me over, but the band does have an interesting style which successfully spans a bridge between melodic black metal and progressive rock elements. The vocals are hybrid of death and black grunts and snarls, and the riffing alternates between streaming melody and groovier, blunt rhythms. The synths are used to create a creepy cosmic carnival of atmosphere, but are mixed nice and snug behind the vocals and guitars so as not to overburden them. The pianos are also a good touch.

The band is at their best when getting all glorious on "From the Ashes" and the EP's finale, "The Perpetual Myth" itself, which is akin to Dimmu Borgir having a jam off against Bal-Sagoth. Often the band will break for some more mischievous sequences in which they showcase different tempos and an increased use of the piano/synth, and these work quite nicely in the compositions and remind one of older Arcturus. I'll be honest that I discovered only a few memorable riffs here, but the band is concrete and talented, and it's only a matter of time before they hit those right notes and launch themselves into the stratosphere. I'll be listening.

Highlights: The Perpetual Myth, From the Ashes, Ruins