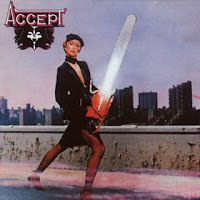 It's hard to believe 30 years have passed since the German metal gods Accept released their self-titled debut, and it still sounds fresh and inviting even by today's standards. This is not one of their best albums, nor does it feature many of their classic set pieces, but it was nonetheless an impressive offering in an age where hard rock was slowly transmuting into heavy metal. Like America's Riot, Accept were one of those non-English bands who could run toe to toe against the emerging NWOBHM bands like Judas Priest, Samson, and Tygers of Pan Tang. And alongside Priest and Maiden, Accept were a band to spawn 1000s of imitators, even after the passage of decades.

Naturally, my preference is for the harder rocking tracks on this album. "Lady Lou" is a solid entry track with some Van Halen swagger, and a reigned in performance from the fucking madman Udo Dirkschneider, one of the finest human beings to ever breathe air. "Tired of Me" is a scorcher with some explosive melodies and dirty ass blues edge. The ballad "Seawinds" is perhaps the album's most beloved track, a beautiful, elegaic performance. But in my opinion the best tracks on the album are the screaming, intense "Sounds of War" and the ballsy blues metal of "Hell Driver", despite the goofy lyrics.

Hey man, you're crazy, you're looking so bad
Your body looks perfect, your face like a rat
You are a loser, only shit in your head
You are a fighter, a devil in bed!

Udo does let loose quite a few times on the album, but it's not at the air raid level of his later work (in both Accept and his solo band). It was 1979 and I just don't think the world was ready. I was ready, but I was also five years old and had little say in foreign policy. At any rate, in 2009, we are all ready to take a time capsule back to this pretty badass introduction to one of the world's classic metal bands. Hard to believe it only sold about 3k copies when it dropped!

Highlights: Tired of Me, Seawinds, Sounds of War