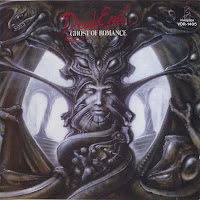 Though they would never achieve the same level of success as a Loudness or Anthem, Japan's Dead End were another melodic speed metal group who wrote some good material! That is, until they spluttered out at the end of the decade and started crafting bizarre pop rock. Not surprising, as the band was always a bit into the visual rock scene (not unlike Seikima-II). Ghost of Romance is the band's most accomplished album, from its memorable cover art to the romantic, raw 80s inflections of its composition. I was first introduced to the band through the song "Phantom Nation", and it remains my favorite from the band and one of my favorite Japanese metal songs period, with its endless delightful riffing and expressive vocals; which Motoyuki Ohtsuka delivered in a hybrid of Japanese and English, with a cutting voice that seemed both sloppy and strangely melodic.

But "Phantom Nation" is not the only vibrant, memorable track on the album. "The Damned Thing" is cheesy and fantastic, and "Deadman's Rock" is pure fist pumping 80s mayhem. Let's put on our makeup and leather and hit the strip! "Skeleton Circus" is a memorable, melodic hymn which is the second best on the record, and "The Red Moon Calls Insanity" likewise rocks. Even the softer tracks on the album glisten with the band's delicious melancholic drivel. The mix holds up today, if you like your 80s style with loud, central vocals. Dead End were a good, obscure little band, and I'd especially recommend this and their debut Dead Line if you want some early visual kei speed metal. The band is releasing a new album next month, and I'm hoping it returns to this earlier style.