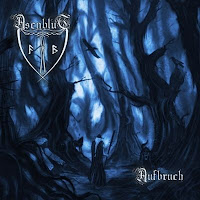 Aufbruch is the debut of Germans Asenblut, another in the endless saga of pagan black metal bands to hail from Europe in recent years. Thankfully, Asenblut largely avoid the cliched trappings of the genre by trampling the folk flag with a crisp, blackened thrash style which centers far more on the metal; in fact, the band reminds me a lot of a thrash counterpart to Sweden's Amon Amarth, with the same penchant for solid songwriting and raging rhythms.

Not every track on Aufbruch delivers, but enough to recommend it to fans that are tired with excessively pompous and frustrating pagan folk bands whose idea is to scrap together a few phoned in metal riffs offset with boring, traditional instruments playing tired standards. Tracks like "Wolf", "Herbststurm", and "Die Legende" exist simply to beat your chest and dream of the glorious lives of your Scandinavian ancestry (provided you have one). The album simmers in a crisp production, but the bass is audible and the vocals and guitars are very well balanced. Vocalist Tetzel has a decent approach which alternates between the expected snarls and the death grunt style of a Johan Hegg. When the band does branch out into acoustics, as in the opening to "Ein Monument", the licks are tasteful and exhibit an almost progressive flair. The digipack for Aufbruch also includes the band's Kampfruf demo from last year. Probably worth a listen if you enjoy Amon Amarth or pagan metal with an emphasis on the latter word.