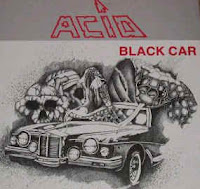 Sadly, it's been considered a novelty, even in recent years, to have a female vocalist in a metal band, as the genre has always been dominated by an endless supply of sausage. But even 20-30 years ago, there were female lead singers kicking some tail. Before Dawn of Detente, or Leather of Chastain, we had Kate from one of Belgium's best and earliest speed/power metal bands, Acid. The Black Car EP is a fine example of the band's style, pure speed metal filth with aggressive rhythms, and of course Kate's 'acidic' vocals which could carry a melody despite their vitriol.

The Black Car EP was released in a year between the band's great Maniac album, and their swansong Engine Beast. It's only got four tracks, but each of them is catchy: "Black Car" for its memorable chorus, "Drop Dead" for the charging rhythms and out of control lead, "The Day You Die" for its ramped up Judas Priest-like speed riffing, and "Exterminator" with its cheesy intro sample and epic, slugging pace, which actually includes the lyrics:

Would I lie to you? No, so go now, and track down everything this band has ever released.

Highlights: A female singer who does not suck, and also...there are songs.