Ceremonial Castings - Barbaric is the Beast (2006) 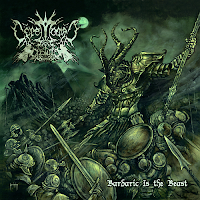 In 2006, the brothers Superchi followed up Immortal Black Art with Barbaric is the Beast, which marked a major depature in the production style from the past Ceremonial Castings albums to great success.

The album opens with the killer title track and within the first minute the change in the sound is apparent - the guitars, the drums and the keyboards have all changed from the full and powerful (as far as black metal goes) sound heard in the earlier albums to a much more empty and raw sound. Lord Serpent once again employs his full vocal range from his guttural death vocals to his classic black metal vocals, combining them to great effect to sing some truly blasphemous lyrics:

Rise Oh Great One, Indulge In The Womb Of Virgins' Blood
Desire The Hunt, The Hunt That Draws The Flesh Of Reconciliation

Awake From Your Slumber, The Time Has Come To Regain The Throne.
Rise within The Shadows, Strike Upon The Breast Of Hope

Most of the album is of similar quality, though three other tracks really stand out. The first is "Our Journey Through Forever", a 13 minute rerecording of the opus off of Universal Funeral March, a truly transcendental song. Second is "Speak in Tongues", a great song reminiscent of something off of Immortal Black Art, complete with Latin lyrics and backwards singing. Lastly is the closer "Sweet Misery I Forsee", a half ambient, half black metal epic singing to the glory of misery. Beautiful.

This is classic Ceremonial Castings, pure and simple. If you have liked anything these guys have released in the past (or future to include Salem 1692) then Barbaric is the Beast will not disappoint you. Happy Hollowe'en.

http://www.myspace.com/ceremonialcastings
Posted by Narian at 11:02 PM