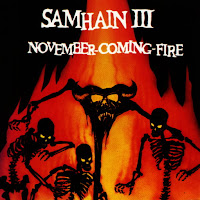 Lodged between Glenn Danzig's legendary years fronting horror punk gods The Misfits and his 'comeback' as the dark, brooding dark rocker Danzig, I feel like Samhain never gets the respect it deserves. It's a shame, because the full length releases are every bit as cool as The Misfits discography, and the direction this band was forging was both riveting and memorable.

Samhain was a natural extension of Glenn's vision for The Misfits, only instead of basing songs around very particular punk & horror themes, the lyrics had become more personal and creepy. The style here is early goth/death rock, like a hybrid of The Misfits and Christian Death, with a touch of metal for good measure. The songs are haunting and often incorporate some discordant elements that remind me of artsy 80s metal like Voivod. November-Coming-Fire was the third release, and second full-length of the band, and quite excellent. Some of the early hardcore refugees of the band had departed by this point (members of Minor Threat, etc) and Eerie Von was in the lineup (he would continue with Glenn into Danzig).

The album opens with instrumental rocker "Diabolos '88", orchestrated in cheesy but effective synthesizers as it leads into the scatter-brained, harmonic chug of "In My Grip", which features one of the best riffs on this or any other death rock-styled album. Depressive and spooky, Danzig splatters his cult-inspiring rock & roll vocals over the mesh. "Mother of Mercy" is more of a big rock anthem with a grungy disposition, while "Birthright" brings back the synths for a hellish, horror punk environment complete with flowing gothic basslines and angry verses. "To Walk the Night" is great foreshadowing for Danzig's s/t album a few years later, but with a scarier backdrop and a beautiful, Elvis-like bridge. "Let the Day" is metallic punk, and "Halloween II" is even more metal, with a crawling pace, Latin lyrics and a fucking killer chorus.

The album is still loaded, with many surprises left to come: the title track is one of the more complex compositions, "Kiss of Steel" is a brief, raging punk with another big, melodic chorus while it lasts. "Unbridled" has a shuffling, rockabilly gait to it with some spooky background choral effects, and the doomy, brilliant "Human Pony Girl" takes us out.

Initium was a great debut, but I feel November-Coming-Fire may have a more lasting depth to it. The tone of the album is incredible, primitive and lo-fi, and Danzig's vocals are mixed just perfectly to sit below the sweltering guitar work, marching drums and omnipresent bass. This is one of the best albums Glenn has ever recorded, second only to 1988's Danzig debut, and a staple I re-visit every October. At LEAST every October. Own this.

Highlights: Let The Day and Kiss of Steel are merely very good, while the rest of the album is orgasmic.

I always tried to get my mum's Samhain shirt from her, to no avail.