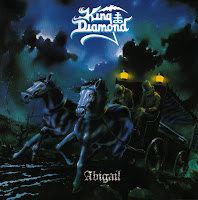 Though his entire catalog from 1986-1990 was unstoppable, Abigail is one of two flawless masterpieces King Diamond produced in the career of his 'solo' band. Boasting a creepy tale of ghostly visitations and potential infanticide, the follow-up to Fatal Portrait is the perfect, rich grounds for King to stalk about with his shattering falsetto and wicked tales of omens and classic horror. But the true wealth of Abigail is its abundant riffing: every chord, every note carefully laid into the fabric of the narrative, and King's best ever backing lineup in place to deliver perfection (Timi Hansen, Mikkey Dee, Michael Denner, and of course the guitar god Andy La Rocque).

"Funeral" is a portentous inauguration for the record, with King doing numerous whispered voices above some synths that swell into a classical formation before the chomping chords of "Arrival" march into the dark European landscape, grounding the wailing, ghostlike melodies that cavort into the moonlight. The song is like a circus of WHAT TO DO RIGHT WITH A METAL SONG. Though loaded with riffs and beautiful leadwork, it still allows for Diamond's vocals to lead the festivities, multi-channel falsettos erupting like caroling, malevolent spirits. If the man's voice bothers you, your opinion isn't going to change with this album, and you can fuck off. "A Mansion in Darkness" offers graceful speed metal with a majestic bridge, bathed once more in unforgettable riffing and dense moonlight. The leads are beyond elegant.

Everything inside was left untouched
Except for what the rats had got,
And the dust of time that showed its mark.
Armed with candlelight and open eyes
Through the dark they fought their way

"The Family Ghost" is one of the best remembered tracks from the album, and for a good reason. It's an ever shifting narrative track with some groove laden rhythms, including THAT riff, the one at 2:53, the one that has ruined a good many pairs of shorts in my lifetime. "The 7th Day Of July 1777" begins with beautiful acoustics, something King's band has always excelled at with every work, and transforms into a raging elegy of homicidal horror. "Omens" creates a colossal, but hollow groove through which the mischief of spirits and portents floats through like a nexus, and "The Possession" has some fist shaking, angry rhythms below Diamond's eccentric poetry.

On the very next morning
When the mist was eaten away by the sun,
Miriam grew hour by hour, and Jonathan he cried.
He knew the ghost had been telling the truth.

"Abigail" is another classic imprint into the King's discography, with more of La Rocque's unforgettable riffing and a rather complex, winding structure that helps progress the story. "Black Horseman" is the album's final piece (not counting bonus tracks for the CD editions), intro'd with a fine acoustic elegy before the powerful, glorious rhythm guitars enter, once more beneath the moonlit melodies.

This is how you build a metal record, and it's difficult to find any fault unless you're an avid despiser of the falsetto vocals employed. There are more quality riffs on this single album than most bands can produce in their career, and it's but one in a long change of masterworks produced by this creative individual and his rock solid backing band during the latter half of the 80s. Even if you're listening to the original release, before any remasters, the album is beautiful, and impeccable. Though I slightly prefer 1990's The Eye for King's as the masterpiece of his career, Abigail is a reasonable argument, more than worthy of the honor.

Verdict: The Coffin's Waiting [10/10] (seven horsemen in the night)

I remember the first time I heard this album. That day, I was not in study hall with my headphones on, no, I was navigating a maze of cobwebs by candlelight as I fled through darkened halls with the pain of losing my love to her malevolent possessor. Simply amazing.