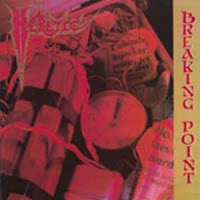 Breaking Point may have been the sole full-length from California's Heretic, but it was a kick ass album without a single filler track. It was released in 1988, the greatest year in metal, and thus buried under a whole ton of masterpiece efforts, but I was quite disappointed to find that the band would split after this, with Mike Howe going on to front Metal Church and the rest of the band, in an ironic twist, joining David Wayne (of Metal Church) to form Reverend.

All of the songs here on Breaking Point are good, and the album has not lost much shine over two decades past its release date. An extremely well balanced blend of speed and harder edged thrash metal, every guitar riff creates a violent impulse to mosh up the nearest human being in the face. Howe's vocals were dirty and powerful, and despite their central presence to the mix of the album, they never grate on your nerves like a Mustaine might. When the band does acoustics, they are timeless and memorable, like the band's namesake "Heretic" or the amazing "Pale Shelter". When it comes to thrashing, they could run neck in neck with almost all of their contemparies in the Bay Area, but Heretic also had an old school heavy metal influence which imparted a great deal of melody to their compositions.

Oh No!
That Feelings Coming On
Don't Turn Your Back
On The Heretic

I've seen a lot of comparison to Metal Church, but really that stems more from the bands' shared membership of Howe and probably the production of the album. Breaking Point is superior to the Torture Knows No Boundaries EP (with Julian Mendez on vocals). It is truly another of the many timeless wonders of 1988 which maintains its luster and nostalgic value after so many years, and it belongs in the collection of any metalhead of taste.

Highlights: Umm...all of them? Okay, The Circle, Pale Shelter, Evil for Evil, And Kingdoms Fall