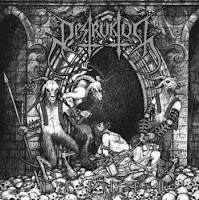 Australia's been pretty pissed lately, and Destruktor is yet another piece of evidence. Another band performing in old school territory has made their way to Hell's Headbangers records and then to your stereo. After a few splits and EPs, Nailed is this band's first stab at a full-length, and a successful puncture wound. Unlike most of the label's acts, this is more of a pure death metal album with a grinding production that recalls a little Bolt Thrower, a little Pestilence, among others. There are some hints at black and thrash metal, but it's largely a meatgrinder.

Glenn Destruktor's vocals are a blunt and monotonous object that repeatedly hammers the back of your neck while the hell fueled grinding rhythms eviscerate your ears. The album opens with "Embrace the Fire", an almost mystical introduction with acoustic guitars over some fine heavier riffing, before it just lets you have it. After this, it's all down hill, and by down hill I mean hell, with each track a blasting, grinding descent into the depths. "The Epitome", "Violence Unseen", "Meccademon", and "Endless Reign of Terror" are all choice tracks here which had me dreaming of the early 90s and the creepy inspiration that real death metal once possessed in spades. Nailed is a fine debut album that should appeal to fans of similar acts like Deströyer 666, or the early years of European death metal. Individually, the tracks don't have a ton of staying power, but as a whole the album is good if you're looking for a 45 minute tour of the abyss.