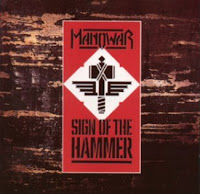 I've often been critical of Manowar, as I've long considered them both the best and worst practical joke metal music has ever conceived. Unfortunately, the joke is on myself and everyone who has ever questioned them, because metal is decades old now and the absurd stereotypes propagated by Manowar and their peers now dominate the world's mindview of our beloved music, which has been a huge hindrance to its acceptance in culture.

But you know what? Fuck culture. And fuck me. Manowar doesn't give a damn. They love what they do and they have never stopped doing it, regardless of the changing extremity of the genre's landscape aroud them. And believe it or not, there was a time where I eagerly awaited the band's albums, since they were pretty spotless in the early phase of their career. 1984 was a busy year for the metal gods, releasing two great efforts. Sign of the Hammer was the inferior of the two (I prefer Hail to England, only slightly), but it is not without some impressive, memorable tracks of its own.

Who can ever forget "All Men Play on 10"? As corny as this track might seem on paper, it's the kind of thing I can play for just about any human being and they'll at least smile, if not break into song themselves. That's how you kick off an album, with balls out riffing, blunt lyrics and a chorus to die for. If you want speed and power you've got "Animals" and "The Oath", but the album truly revels in its more 'epic' moments, the huge tracks like "Mountains" or balladry of "Guyana (Cult of the Damned)", perhaps the best metal song about Jim Jones ever?!

Were you our God or a man in a play
Who took our applause and forced us to stay
Now all together we lived as we die
On your command, by your side
Die by your side

Manowar is truly the band to go mainline with all this sword and sorcery shit in metal music. Sure, bands were doing it in the 60s and 70s, but most modern fantasy power metal streams directly from this album (and its immediate family). They were singing generic tributes to the Vikings and Odin long before Amon Amarth picked up a pen and paper. Miraculously, Sign of the Hammer sounds as strong today as it did 25 years ago, with great atmosphere, powerful chugging rhythms and strong leads. If you're just looking to start their catalogue, this year is a great bet, for having not one, but two killer records. I hate to sound like a 'born again' fan, but listening to this record in 2009 truly puts things in perspective. Death to false metal indeed.

Highlights: All Men Play on Ten, Thor (The Powerhead), Mountains, Guyana (Cult of the Damned)