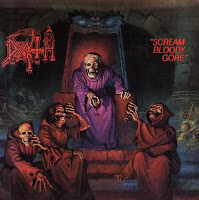 There are many arguments to be made about which album was the first 'true death metal' effort. Many would say Possessed takes this title, and certainly a case could be made, depending on where you feel thrash ended and death began. I like to take the safe route: the first pure death metal album is Scream Bloody Gore, the debut from Florida's legendary Death. The thrash elements remain, of course, since all death metal is derived from that, but this is the well from which so much of modern brutality has sprung.

Scream Bloody Gore is actually the work of only two musicians, the immortal Chuck Schuldiner performing all guitars, bass and vocals, and Chris Reifert (Autopsy, etc) behind the kit. It's a lot more primal than what you'd expect if you jumped on the Death-wagon during the years of Human, Individual Thought Patterns, or Symbolic. Despite what music theory dorks will tell you, the first three albums are the best of Death, because they were able to compose creepy, memorable music that really flaunted the...er...'virtues' of the form: evil sounding rhythms, brutal vocals, and excellent musicianship, without falling off the deep end.

Under command a new-born child
Submerged in blood, the dead they smile
Growing possessed, burning inside
A bloody feast for us tonight

"Zombie Ritual" is easily the most recognizable track from the album, with its evil intro rhythm and flawless bloodflow of gory bludgeoning riffs, but there are many moments that glisten with with the sanguine discharge of its victims. "Denial of Life" has killer bridge and chorus riffing, a thrashing that is both creepy and happy. "Regurgitated Guts" is a hostile riffing beast, and "Baptized in Blood" has some excellent, maddening leads over the driving thrust of its rhythms. "Torn to Pieces" is another maniacal murder anthem that stands out on the album. The rest of the tracks are good, and this is still an album I can listen to all in one sitting, though a few lack that something 'extra'.

As for the downside, the lyrics here really blow, loaded with crappy rhyme schemes and disturbed imagery that a middle schooler might draw in his notebook when he's pissed off at the teacher. You won't find any of the pseudo-psychological, 'mature' tripe of the band's later work here. Just blood, guts, and loathing. But you can only get so much mileage out of:

Alas, thousands of death metal bands would use this simpler brand of lyrics for decades (pick a Mortician record at random, and read the lyrics), so despite my distaste, they were still an influential aspect of the record. The mix of Scream Bloody Gore is burly and raw, I think it remains intense and unforgiving and another reason I miss the standards of the 80s. As cult and important as the record is, I honestly favor its followup Leprosy, which is loaded from front to back with insanely great riffing. But this grandfather of death metal is still superior to about 99% of the genre's output since 1987.