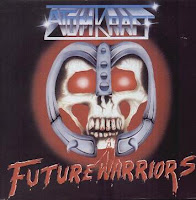 Atomkraft is a band best known for its bassist/vocalist Tony Dolan, who went on to replace Cronos and front Venom for a few albums in the 80s. If you've heard Future Warriors or either of the band's EPs, you can understand why the man was the natural choice. Atomkraft sounds very similar to Venom, although conceptually their lyrics don't dabble in the occult so much as science fiction or observations on our world.

Man's lost horizon's burnt to the bone,
Onward the battle horn sounds.
The Lord of the living is knocked from his throne,
As hell claws it's way from the ground!
Demons may scream,for their lives,
But you cannot defend them!

Now, it's not a 'bad' thing to sound like Venom, and this band's output was quite uniformly enjoyable. It isn't as slovenly or raw as a Black Metal or Welcome to Hell, but it's still oppressive with its thundering, distorted basslines and reverberous production. The title track is a great lead-in for the album, with its resounding, cheesy intro and some furious riffing which showcases both melodic flair and bluesy influence. The solo and bridge rhythm are excellent. Other great tracks here on Future Warriors include "Starchild", "Total Metal", the Motorhead-like "Pour the Metal In" and the caustic "Warzones" with its battlefield samples.

Atomkraft are a class act, and this album holds up fairly well if you're accustomed to the production of deep 80s thrash/speed metal efforts. Certainly worth checking out if you're a fan of old Venom, Razor, Exciter or Indestroy. I'd also like to point out that, despite the popular misconception, Dolan's Venom albums were decent, so if you like this, ignore your scenester friends and check those out too.