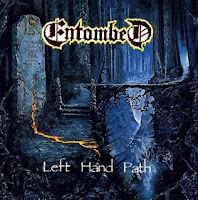 Aaaaaaaaaaaaaaaaaaaghhhh!!! Who could forget that opening to an album, as the horror chords of a synthesizer part ways like a funeral and the ears begin to rupture to some of the sickest, ooziest guitar tone that has ever been recorded emits from the speakers. Entombed have arrived from the ashes of Nihilist, and death metal could never be the same. This is the face that launched a thousand ships, if ships were Scandinavian death metal bands.

The crushing tones are delivered in blitzkrieg fashion, owing as much to early grinders Discharge and Repulsion as it does to the few death metal forebears that existed by 1990. But there is considerably more to Left Hand Path, the album is truly dark, from the psychological imprint left by the cover image to the morbid, erupting cemetery vibe contained in the riffs. The title track opens the record, 6:39 of fast, crisp riffing that winds down into massive grooves, blistering leads, and even a creepy breakdown with more horror flick synthesizers.

But that track was simply the icing on the grave. "Drowned" grabs your ankles and pulls you back into the band's festering morass, with some punkish hardcore fury and old school brutal guitar lines under Lars-Göran Petrov's echoed barks. "Revel in Flesh" radiates more hardcore/punk influence, with a churning, mid-paced thrust. "When Life Has Ceased" weaves more complex riffing into a violent momentum, and "Supposed to Rot" has that amazing, emotionally descending rhythm. "But Life Goes On" was one of the breakout tracks here, memorable for the pattern of chords behind Petrov's chorus, and the frenzied grinding guitars.

"Bitter Loss" is one of my personal favorites, even among such standout peers, for the shadows cast by the melody over the dense, opening chords. The verses are total d-beat grindage that bands are getting paid today to copy. "Morbid Devourment" is pure slugfest, and "Abnormally Deceased" uses its guitars like hammers on your spine. "The Truth Beyond" is the original closing track to the album, with some evil guitars and more of the band's flattening chords, but if you have the CD version then you've also got the punk flavored "Carnal Leftovers" and the sadistic "Premature Autopsy", with its freaky vox (I wish they had used these more often).

The influence of this album upon decades to follow is monolithic. I can rattle off the names of many bands whose entire sound and career relies upon their ability to copy Left Hand Path, changing the notes and song titles but shoveling you the same shit you had already known. It's also the album most responsible for the proliferation of Skogsberg's Sunlight Studio guitar tone, which many other death metal bands adopted (even those that weren't cloning this band's riffs). It's one of the most important death metal records, one of the cornerstones for the foundation and survival of the genre into the 21st century. It's spotless.