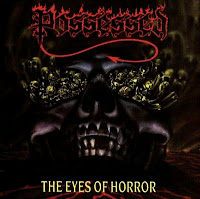 Seven Churches and Beyond the Gates have both earned Possessed a fanatical cult following, considered seminal works of 80s occult thrash metal and pioneering releases that led the genre into its next evolution (death metal). But The Eyes of Horror EP, which followed, is often left out of the conversation. Boasting a tighter coordination and cleaner production than their full-lengths, the five tracks on this release exhibit what Possessed might have become had their career forged on, solid thrash with some similarities to then-albums by Hallows Eve (in particular, Monument's guitar tone sounds a lot like this recording). The EP was recorded by guitar guru Joe Satriani.

"Confessions" begins with a forceful, grinding thrash rhythm swathed in Jeff Becera's charnel vocal tone. It's pretty memorable and vile, but you'll notice right away it's a bit polished up from the band's origins. "Eyes of Horror" is a slower groove with some nice rhythm work beneath the leads, and an unforgettable first verse (though the lyrics are admittably pretty weak).

I believe only the real
Walk through life on what I feel
Living my life from day to day
What's wrong, what's right, who's to say

The title track is the creepiest and best on the album, with a death metal visage implied among its churning guitars and quite a few catchy riffs. I really enjoy the chorus vocals, with the sinister echo. "Swing of the Axe" is a vicious track that recalls Slayer's Show No Mercy, and the final "Storm In My Mind" opens with some nice leadwork and busts out a nice mid-paced thrashing rhythm later on. The material here might feel more focused, but that steals away nothing from its dark nature. The lyrics seemed to be moving in a more personal direction, but the ability to write memorable, ominous rhythms is untouched. Most probably have this EP tacked on to their copy of Beyond the Gates, but it's worth hearing to any fan of evil 80s thrash metal, even those rare souls who don't care for the band's legendary full-lengths.

Highlights: Confessions, Eyes of Horror, Swing of the Axe