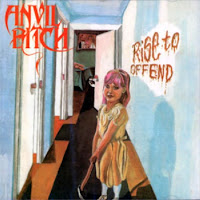 Imagine you're a Pennsylvania blue collar thrash metal band in 1986 about to release your debut album in a year that would produce Master of Puppets and Reign in Blood. Madness! This was the case for Anvil Bitch, and Rise to Offend, while competent and crafted with the loving filth that characterized many obscure thrash records in its day, was lost in the pack.

Rise to Offend is dominated by its simple but effective chugging tones, which bring to mind the immortal Kill 'Em All. Gary Capriotti had a vocal style not unlike A.K.'s vocals on the first two Flotsam & Jetsam albums, but does occasionally falter into a lame falsetto voice that probably should have just been left off the album. At best, the writing on this album can be remembered as Kill 'Em All's scrappy little brother. He throws on a dungaree jacket, grabs a tire iron, and heads out into the street to rough up the locals ("Lie Through Your Teeth", "Life After Death", "Time to Die") but takes a few lickings himself ("Argue With a Sick Mind"). Surprisingly, the album saves its best for last, the energetic "Shark Attack" and the band's namesake "Anvil Bitch". I really liked the provocative name of this band and album title, but they would ultimately outlast the charms of the music itself in the end. But if you're fixing for a dirty, honest, and raw 80s thrash experience for the mid 80s and have run out of Hallow's Eve records, shoot this into your veins.