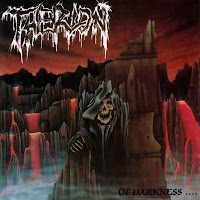 If your attraction to Therion's music stems solely from their later work, which incorporates increasing use of choir and orchestra to create conceptual, gothic metal symphonies, then their earliest albums might be a little outside your comfort zone. But there was a time in which Therion produced some bleak and evil death metal, with only the barest hint at the band's future direction.

This hint comes in the form of synthesizers, which are used on the opening track "The Return" to create another level of atmosphere behind the dense and central guitars. The guitars are so thick on this album, broiling beneath Christopher Johnsson's reverbrous grunts, that you feel like you are drowning in molasses. "Asphyxiate With Fear" is a faster flurry of vomitous death metal, more in line with early, thrashing Pestilence. In "Morbid Reality", the Hellhammer/ Celtic Frost influence shines through the churning guitar rhythms, though it's faster to the point of grindcore. "Megalomaniac" has a good melody to follow, and "A Suburb to Hell" is one of my easy favorites, from energetic thrash to grinding disgust, and some haunting melodies thrown in there. "Genocidal Raids" is Hellhammer-inspired thrash that opens with a doomed atmosphere, and "Time Shall Tell" revisists this pervasive hybrid, with some sick leads. "Dark Eternity" ends the album with some beefy grooves.

Fighter, rider of the human rights
The killing decision is coming from behind
Disinter the background of this obscene hell
Discover the fear, the sickness and the death

Though charming enough for classic purists of the genre, Of Darkness is far from Therion's best work. The lyrics are average at best, and downright silly in some places. They range from the occult to the more relevant, social topics you'd find in thrash metal. McDonalds feed their cows with our children's lives. I knew there was a reason I liked to eat there.

You can hear the roots of Lepaca Kliffoth here, and the album holds its own against many forgotten peers of the age, but Johnsson and band would have grown bored writing more than a few albums like this, so the orchestral evolution of the band was a wise choice. It's pretty interesting to go back to this or Beyond Sanctorum, then explore the band's incrimental metamorphis through Symphony Masses and Lepaca Kliffoth to their later, diverse concept albums with all the guest musicians.

Highlights: The Return, Megalomaniac, A Suburb of Hell, Dark Eternity