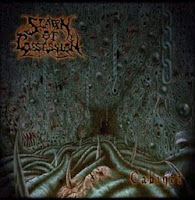 To the unprepared, Spawn of Possession's full-length debut was like a well timed ambush. Sweden was always (and remains) best known for its old Tomas Skogsberg guitar tones, the grinding and pummeling sound of formative bands like Entombed and Dismember, which transformed into the melodic dominance of At the Gates and In Flames. But there is another side to Swedish death metal, the technically infused brutality of bands like Visceral Bleeding, Anata and, now, Spawn of Possession.

Cabinet is a very surgical record, with precise strikes of technical death metal reflective of a great many brutal US influences. You can hear the Floridian roots to the sound, but Spawn of Possession was superior to many of their peers during the earlier 21st century. Cabinet is an acrobatic record, each track a collection of whirlwind riffing, a labyrinth of brutality that each listener must unravel one corridor at a time. It's thoroughly entertaining, even if there aren't a lot of extremely memorable riffs to die for. "Swarm of the Formless" and "Hidden in Flesh" are a colossal entry point, with so many guitars flying past that your head may twist of its neck if aren't expecting them. Deeper on, the album maintains its untiring level of busywork, with standouts being "Dirty Priest", "Inner Conflict", and "The Forbidden", but every track a lattice of technicality and inspiration.

The lyrics center on classic tales of occult/horror films, which is pretty cool, considering most tech death bands prefer a gore/medical theme to accompany their audio surgeries. The band's level of technicality is bewildering, and of course the mix needs to be crisp that all of these guitars can pop with the nuances of their frantic riffing. The leads on the album are creepy, and despite the thinness of the tones, there is an oppressive, dark atmosphere captured on every track. The vocals are similar to Glen Benton's lower, growling voice in Deicide. I won't claim Cabinet is a masterpiece of the genre, as there aren't so many individual, haunting tracks, but it's a tight 40 minutes of impressive, athletic brutality done well. Admirers of this album would also do well to pick up the followup, Noctambulant.

Highlights: Swarm of the Formless, Hidden in Flesh, Inner Conflict, The Forbidden