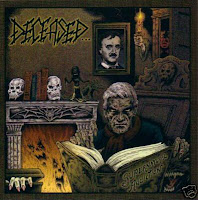 Fearless Undead Machines (1997) was a pretty good horror metal concept album, from one of Americas best old school advocates Deceased, but three years later they would trump that release with the more melodic, classic metal tinge of Supernatural Addiction, which I consider to be the band's strongest work to date. If you're a fan of the band's earlier, heavier work, fear not, because the primal death/thrash metal roots are abundant. But the injection of pure 80s inspired NWOBHM melodies into the mix adds a depth to the writing which simply did not exist in large quantities prior to this.

Like the cover art implies, the focus of this album is to celebrate the more cerebral, psychological side of horror than the visceral corruption covered on Fearless Undead Machines. The writings of Poe, the classic ghost story, the dark black and white horror of silent film, all of these are inherent influences which translate well into the lyrics. "The Premonition" is a driving track with some soaring if haunting melodies, and King's Venom-like voice is at its peak, mixed in extremely well with the rhythm guitars and leads. "Dark Chilling Heartbeat" has a pair of fine, winding leads to intro the shuffling, somber tone of the obvious tribute to Poe's Telltale Heart. "A Very Familiar Stranger" is a raging roadster based on The Hitchhiker. Other excellent tracks on the album include the blistering "Frozen Screams", the morose and beautiful "Doll With the Hideous Spirit", and the fright fest "Chambers of the Waiting Blind".

Six days and still they starve him as they offer mercy none,
For the hate it brews within them from his past,
In his body there is panic as he senses dread approaching,
He starts screaming for this torture ride to end

Like some of the past records, Supernatural Addiction uses a different sort of lyrical approach from the typical metal album; where the words simply speak the narrative of each tale, organized into a rough approximation of verse and chorus. I wouldn't call them poetic so much as a death metal Rod Serling sitting by the fireplace, recounting visions of the macabre. The mix of this album is simply unmatched by anything else in the history of the band, and like its predecessor, each track is loaded with a slew of riffs to explore. Few artists can balance such an excellent array of influences as King Fowley and crew, thus Supernatural Addiction winds up another cult classic for the ages. Whether you enjoy the pioneering thrash/death metal sounds of Possessed or Venom, or the more melodic NWOBHM/power/speed metal of the 80s, this album has many a moment for you. While I have never found any of their albums to be perfect, they are easily one of the more consistent metal bands of the past 20 years.

Verdict: Epic Win [9/10] (it's here and there and everywhere and all so hideous)