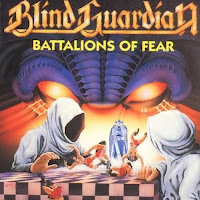 It's always fun to listen back to the early years of a band like Blind Guardian, because there is such a distinct sense of evolution from their roots to the behemoth they've become. After changing their name from Lucifer's Heritage, they maintained that rugged but melodic speed metal style for their debut Battalions of Fear. There is an honest charm to this album, because let's face it, while their recent material is well written, the albums are massively overdubbed and overproduced to the point where they sound like they too much like an effects processor.

Not so with Battalions of Fear, a speed metal record with a polished grit that places it alongside its then-peers Risk, Rage and Scanner. Some of the tracks here are culled from their previous demos as Lucifer's Heritage, but there is no backwards feel to any of them. The entire album flows together well, from the anthemic "Majesty" and its flurries of chorus melody to the excellent closing instrumental, "By the Gates of Moria". The most memorable, standout tracks include the band's namesake "Guardian of the Blind", the excellent "Wizard's Crown" and the title track, which has a nice, heavy bridge and some excellent leads.

Most of the lyrics here involve fantasy, mythology and religion, so they haven't changed much in that aspect. They're not very good on Battalions of Fear, but this is understandable since a lot of the songs are from the mid 80s when such things were not so important for metal music. The production is pretty good for 1988, the rhythm guitars churn and the leads slice straight through. I actually prefer this sound to the massively overtracked Night at the Opera or A Twist in the Myth. Hansi's might not be as catchy with his vocals as on later albums, but not for a lack of trying, and he sounded wild, young and free on this record. Blind Guardian was far from the titan of power metal it has become in the 21st century, and this album came out in a year in which it was surpassed by so many (there was very little buzz over this band when they started, I would only see them mentioned on longer lists of German power/speed metal). But Battalions of Fear holds up well, it's a fun listen.

Highlights: Guardian of the Blind, Wizard's Crown, The Martyr, Battalions of Fear