The Vision Bleak - The Deathship Has a New Captain (2004) 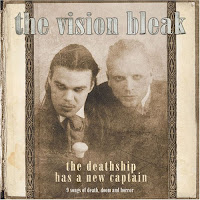 If you're going to create a gothic metal band, there is no shame in going all out, embracing both the genre's image and lyrical aesthetic. For their debut, The Vision Bleak did this in style, molding a campy image which summoned nostalgia for old black and white horror films. Lyrically, the band also adheres to the past, each track a tribute to the roots of horror, old Europe, and human suffering.

It all comes together quite nicely, especially when combined with the band's phenomenal production standards. Each of their albums is brazen, loud and heavy, with more crunch to the guitars than most other metal bands in any genre. Their debut, The Deathship Has a New Captain, opens with "A Shadow Arose"; a nice little narration and some operatic female vocals to establish a cheesy introduction. Soon the crushing guitar tone arrives, and then passes for the haunted house keys that open "Night of the Living Dead", which will bowl you over with its huge riffs and creepy verses. It's a great song for your Halloween costume party, you can mosh it up while you chug all the spiked punch. "Wolfmoon" is undeniably catchy, Ulf Theodor Schwadorf's deep gothic Germanic tones both lavish and horrific, you can tell why this was chosen for a video. Great song!

Oh, young fair maid, did you not see,
the moon is full tonight?
Run -don't walk- from the moorland, flee!
Before he is in sight...
To feast upon thy maiden flesh,
to eat thy heart and soul.
Wolfmoon, Wolfmoon burning bright,
through the forests of the night.

"Metropolis" is a fine, crunchy tribute to the silent classic of the same, and "Elizabeth Dane" a somber tribute to The Fog. "Horror of Antarctica" is an atmospheric, gloomy bruiser which references an Edgar Allen Poe story. "The Lone Night Rider" is a crusher with some cheap and cute synths cutting through the dense riffage, followed by the even harder rocking of "The Grand Devilry". The final track "The Deathship Symphony" picks up the same narrator from the intro and then creates a gothic, operatic monument to celebrate the close of the debut.

So if you hate it is his stage,
he plays the wicked and the wretched
and if you hide you will fail to see
the grand devilry!
He is the poison
in our heart.
The flaming word
in each poets art.

Once again I must re-iterate how goddamn good this album sounds...the tones are unbelievable and every flight of orchestration and cheap creep synth is perfectly balanced. You might think the band is corny, but they are far heavier than other gothic metal acts and the songs are perfect for Autumn meandering thoughts and violent slam dancing. Schwadorf and Konstantz (aka Tobias Schönemann and Markus Stock) really show their experience here from other bands (Autumnblaze, Nox Mortis, etc) and create their most accomplished work yet. If you enjoy this, there is no reason not to track down their later albums as well, which are both very loyal to the vision and likewise excellent.

I've loved this album ever since you posted the "Wolfmoon" video and got me into it. "The Deathship Symphony" is so god damn good it makes the hair on my neck raise every time I listen to it.