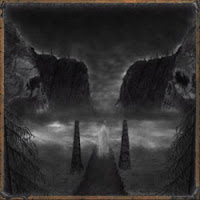 Örök Halálban ('In Eternal Death') is the sixth album from Hungarian menace Dusk, and delivers all the grim vitriol you could shake your feet at in your last moments of life, as you plummet through the scaffold and the rope jerks back your neck, your body like a twisting puppet. With only three tracks at a playtime of 40 minutes, you know up front there will be an investment of time and patience. I didn't feel that this album fully rewarded mine, but if your only terms for entry include are a wealth of suffering, bleak and black, it should hit those notes.

"Egy Megszakadt Holt Lélek" is the stark, 17 minute opus which opens this album, exchanging between a slow, majestic pace to some faster sequences. Cloudy with a chance of rain, the song spends all these moments developing atmosphere with little payoff throughout, and I grew anxious as it drew to an end. The title track is the shortest on the album, under 8 minutes, and has a more rousing, punk rock influence to its first riff. Though it begins to weave desolate melodies into its core pattern, the tempo of the song grows boring and is carried on for far too long. "A Pokol Kapuja" caps off the album with 14:44 of oblivion, probably the most effective track on the album, slow and punishing, but again, the repetition does not serve the song well. Örök Halálban is certainly a depressing album with an appropriately hostile environment, but nothing to stand out.