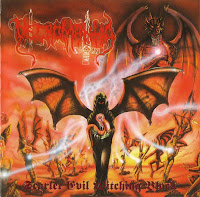 Necromantia's use of the 8-string bass in place of the traditional 6-string guitar has made them a unique force in the black metal genre, especially when you consider how long they've stuck to the technique. That is not to say Scarlet Evil Witching Black is entirely void of the traditional guitars; they are used here for acoustic moments as well as leads.

It stuns me how little this has any effect on the band's hell-spawning vitriol, because these are some of the most savage guitars ever committed to disc. Scarlet Evil Witching Black is the crowning moment for a band who receives far too little credit, and it's arguably the crowning achievement of the Greek scene. The 8-string bass is not the band's only forte, as pianos and saxophones also exist in this negative plane, and a subtle and beautiful orchestration provides a brilliant counterpoint the rugged, raw thrust of the two basses. Magus Wampyr Daoloth has a sinister edge to his vocals, like the frolicking of imps and homonculi about the burning palaces of Hell.

I'll weave an invocation
To insanity and rebirth
Fiery lightning hold my hand
Show me your face in black waters
My worst, declared enemies
Are my most devoted slaves
They inspire me a wolf idolatry
I'll burn them in my witch-pyre

All the material is enormous and evil. "Devilskin" enters with distant whipping winds, and the cordial sounds of a music box-like lullaby, before the raging basses erupt like an abandoned palace of heaven crashing into a volcanic, abyssal maw. "Black Mirror" begins with a doomed gait, glorious sunken memories evoked through the dingy, dual bass. "Pretender to the Throne (Opus I: The Usurper's Spawn)" uses some interesting, shouting vocals along with the incredible basswork and synths. At :43, one of the greatest riffs ever kicks in, a vile march towards the jaws of Leviathan. "The Arcane Light of Hecate" is a ritual, orchestral piece without the metal elements...and yes, a creepy fucking saxophone solo! Unbelievable.

Oh powerful queen, thy the knowledge of fear
Dangerous when crossed, the art of sorcery
The bringers of joy and misery
Thy children never tell thy mystery

The metal continues with the downward spiral of leadwork and driving bass of "Scarlet Witching Dreams", and the hellish, bludgeoning of "The Serpent and the Pentagram". Then you are treated to a familiar classical sample that leads into "Pretender to the Throne (Opus II: Battle at the Netherworld)". While a great song, this is perhaps the one piece on the album that was not entirely compelling. But the scintillating monument to sorrow, "Spiritdance", makes up for this with its ever-weaving orchestrations acrest the tumult of the clean and harsh vocals, and the bass wasteland.

Scarlet Evil Witching Black is a sick album. It's the best of Necromantia, and one of the most unique creations in the underworld magmasphere of occult black. Inspired by its rituals and imagination, it made an amazing companion piece to Therion's masterpiece Lepaca Kliffoth (which also released this year). A true masterwork of Greek misanthropy.