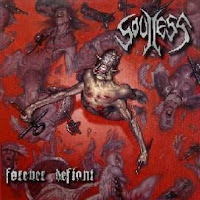 Soulless does it all correctly. Jim Lippucci's vocals snarl with the proper dosage of Lindberg venom, the songs are well-structured, just about every riff here meticulously crafted and applied with melodic grace amidst a technical death-thrashing blunt force trauma. The result isn't just another notch in the belt of the melodeath genre, but an album that will appeal to most fans of the metal riff. Technical enough to keep the interest of basement virtuosos aplomb, but savagely catchy enough to stand alongside the Rusted Angels and Jester Races of the world as a timeless celebration of the carefully balanced attack so intrinsic to this style.

Each of the 14 original tunes is consistently superb, you are getting a lot of meat for your money. Among my favorites were "The Price of Life" and "As Darkness Dawns", the latter of which has some of the best riffs I've heard this year. The band is not above a break in the action such as the great acoustic piece "D-Composition", and the album is capped off with a cover of "Kill the King".

Amidst the endless, leaking, stagnant vats of Swedish wanna-be Black Dahlia Earmurder porridge in the States, Soulless have crafted a timeless entry into a genre many have given up for dead. The next time you are shuffling through your records, fawning over Heartwork and Slaughter of the Soul and wondering why 'they don't make 'em like these anymore', stand yourself corrected. Forever Defiant may just be the greatest American melodeath album I have ever heard. It actually matters.

That is awesome cover art, I have to say.

Also, even though I swiped it from our old blog.