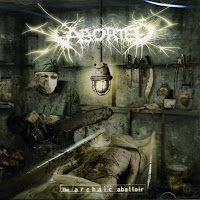 Aborted is the only straight up death metal band out of Belgium that I listen to on any normal basis, starting with the 2nd album Engineering the Dead. The Archaic Abattoir is the band's 4th full length, coming off the heels of what many fans consider their best, Goremageddon. Aborted rock a style that infused grinding Carcass rhythms and brutal drum work with a lot of breakdowns. For this reason (and the way the vocals are positioned over a lot of the chugging riffs), they cast a few misleading -core shadows on this album and its successors.

Eviscerated carnal delicatesse
Had been lying around for days
My cannibalistic malpractice enthralls
Gangrenous process in excess
Bereaving the swarm of flesh
A malpractice in necronutricious form...

But don't panic. The Archaic Abattoir is still hand over fist a death metal record, with energetic bursts of controlled chaos such as "A Cold Logistic Slaughter", "Gestated Rabidity", and "The Gangrenous Epitaph" sure to inflame any pit starved crop of gorefiends. The band does display moments of branching out here, such as the brief electro rhythm that breaks into "Voracious Haemoglobinic Syndrome", a track that balances grooves, brutality and some further synth. Closer "Decend to Extirpation" does have some dual corish vocals to it, yet the leads and melodies make the song feel bloody and fresh, and it busts out a truly old school feel during the bridge. I'm not fond of all the tracks on the album, for example "Hecatomb" is a waste of space, just under three minutes of mostly metalcore breakdowns that occasionally transform into deathgrind with a boring selection of notes. "The Inertia" loses just that, it begins with a bang and later descends into some bland riffing before a final, sad guitar rhythm attempts to save it.

It's almost as if the album refuses to commit itself fully to awesomeness, playing safe with a few lame pit grooves in a number of the tracks. Granted, it sounds fantastic, with big, chunky guitar rhythms that recall Carcass and no lack for bass or drumming. I prefer Sven's vocals when he's straight up grunting, the use of multiple layered vocals only serves the -core aesthetic, and there is a straight metalcore bark used often. The lyrics are actually decent here, a little deeper than the average sloppy gore. Though it shows moments of worth, The Archaic Abattoir is sadly pale in comparison to the previous two albums. Fans might find enough here to listen on, but my impulses are better served through Engineering the Dead or Goremageddon.

Verdict: Indifference [6.5/10] (eyelids scrutinize in this portrait of idolatry and rot)

My friends friggin' gush over this album. I thought it was pretty lame.