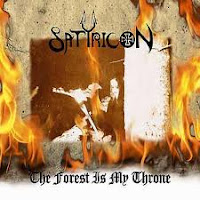 There are two essential Norwegian black metal splits of the 90s, and it's not a surprise to me that Enslaved participated in both of them. They had he stronger presence on Emperor/Hordane's Land, but despite their enormous contribution to this one, with around 40 minutes of material, I think Satyricon match them almost pace for pace here, even if their half is only about 25 minutes. When you add that up, of course, you're looking at over an hour of material from two of the best of that 90s scene, a lot of which is not available elsewhere, at least not with as much value as experience both halves combined.

Basically, each band has offered up a demo, to which they had tacked on a new track just for this release. The Forest is My Throne was originally released in 1993 as Satyricon's second demo, after All Evil the year before. Of the four tracks, only "Min Hyllest Til Vinterland" would be redundant with Dark Medieval Times. "Black Winds" opens with an opaque zephyr of noise before erupting into a measured riff-fest, with some mid paced, raw guitars reminiscent of Bathory and Darkthrone. There are brief explosions into faster material, and Satyr's vocals are pretty intense, especially at that point right before the 6 minute mark where he opens up enormous growling over the slicing, blast sequence. "The Forest is My Throne", however, is my favorite of the demo, with razor riffs that march along with all the glory of Bathory circa Blood, Fire, Death, under some great atmosphere and effects. I do feel that the drumming is mildly uneven in volume, but otherwise it's excellent. Their last bit is "The Night of the Triumphator", which begins with a sample of fornication below some evil synths, and then explodes into some crude, primal black metal which sounds like early Immortal. I dug the growled vocals and the Celtic Frost undertow to some of the slower guitars, and it's fairly consistent with The Forest demo material.

Yggdrasil is a slightly earlier demo (1992), and features Enslaved at some of their crudest, which I find every bit as enjoyable as their acclaimed full-length debut Vikingligr Veldi (1994). Again, there is very little overlap to worry about. "Heimdallr" appears on that album in a more 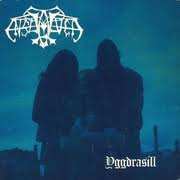 polished form, and "Allfáðr Oðinn" is also included with Hordane's Land, but the rest of the material feels like virgin, Christian soil to conquer if you hadn't already had access to the demo. There's a pipe organ "Interlude" which feels more or less worthless, but "Hal Valr" is a rush of raw, glorious Viking black metal with some tight tremolo riffing and a lot of crashing percussion and synthesizer accents. The mix is a bit rough, with the drums and guitars feeling a little too separate, but this and "Niunda Heim" are both great, even if the piano/choir outro "Resound of Gjallarhorn" is forgettable. The band's new contribution, "Enslaved" itself is a great, vicious storm of tightwire riffing and brutal, bloodied Grutle Kjellson rasping, but once again the louder percussion screws a little with the depth and tone.

In all, this split is a tremendous value, and I certainly can't fault these bands for making the demos available in such a form, while at the same time expanding their audience. Which, when you think of it, is the entire point of the format: you scratch my back, and I scratch yours. Along with Emperor/Hordanes Land, this was very likely the first exposure many had to these acts, in fact I know people who owned the pair of splits and had never even heard Vikingligr Veldi or Dark Medieval Times. Not every individual track is great, and some are available elsewhere, but there is a particular authenticity to this release which makes it worth a purchase, despite the demo level production of most of the content.

Verdict: Win [8/10] (through centuries of weakness)

Posted by autothrall at 7:04 AM