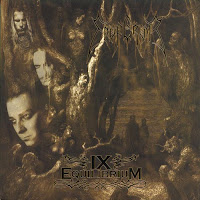 The one thing IX Equilibrium gets immediately right over Anthems to the Welkin to the Dusk is that it grabs the listener by the throat and then keeps squeezing. While I can't promise that this is some cohesive work of brilliance on the level of Emperor's debut, it's at least far more engaging over the course than its 1997 predecessor. While this album adheres to Anthems level of studio presentation and polish, many of the individual components stand out far more on their own. It's not some wall of force from which the audience should be expected to pluck out individual, memorable strains where there are none. The guitars are more potent, frenzied and pummeling, and the vocals more angered and distinct, or more convincing when they swerve into cleaner territory. The riffs are slightly more charismatic and varied, and the lyrics just as strong as either of the earlier full-lengths.

That said, where this one suffers a bit is in the consistency of the songs' quality. A few of them kick serious some backside, and the rest are competent but undistinguished. IX Equilibrium can seem almost confusing for the first few spins, due to its heightened sense of technical acrobatics, a hyperactive carousel of psychosis. Given some attention, though, it yields reasonable enough rewards and several of the tracks belong on any Emperor highlight reel. It's also worth noting that this is really the final 'black metal' album in the Norwegians' career. Esoteric and artsy to the extreme, Ihsahn and company never had any real intentions of repeating themselves, but stretching the possibilities of what this music could accomplish if flavored with various outside influences. The obvious would be neo-classical composition, but if you've listened to either of the head honchos' other projects (Peccatum, Zyklon, Ihsahn solo material ,etc) you can hear the larger pattern of evolution always at the fore of their creative mindset. And given Emperor's position as top shelf, intelligent entertainers, I think they set a pretty good example for the many black metal acts since who've incorporated classical, progressive, ambient and death metal into their throughput.

IX Equilibrium takes no time gathering its storm together and unleashing it through "Curse You All Men!", one of the more exciting tracks on the album, with loads of intense riffing that never seems to become overshadowed by the backing orchestration. The verse rhythms are taut and punishing, with cautionary horns blaring off against the muted tremolo, yet at the same time playfully threaded with sweeping pianos. Not all the patterns are interesting, but so unified in thundering violence that you never really get to come up for air and complain about it. The same could be said for numerous other tracks here like "Decrystallizing Reason", "The Source of Icon E", or "Sworn", all of which practice the same overwhelming whirlwind aesthetics and prove that Emperor was still one of the most precise, hard hitting acts throughout all of the modernization of European black metal into the 21st century.

But in truth, this is an album which becomes more intriguing in lockstep to its eccentricity. One of the finer pieces is "Nonus Aequilibrium", which makes excellent use of the clean, brooding along with a surgical sequence of rapid fire mutes and gleaning, sparse melodies. "An Elegy of Icaros" measures off smoother contours of progressively infused guitars with some swerves into pure thrash, vibrant synthesizers and more of Ihsahn's howling. "The Warriors of Modern Death" has this great, mid-paced rocking undercurrent which reminded me quite a lot of the late 80s Viking initiative taken by Bathory, only with some bursts of chugging, orchestration and unusual, subtle leads to vary the formula. Yet, even in all these cases, one can trace the straight roots back to Anthems and In the Nightside Eclipse. Emperor had yet to foray too far from their original path, and thus IX Equilibrium earns a measure of respect even from those who loathe its successor.

Ultimately, while it's a more functional and formidable follow-up to Anthems to the Welkin at Dusk, the album still lacks a lot of that punch which cast the debut instantly into legend. It may just be the more polished production standards, which leech away some of the malevolence and mystique of the genre, but thematically the songwriting here is more about dextrous wizardry than creating some pervasive, haunted atmosphere. I was personally the most impressed with this band when I could listen to their music on some cold or raining (or both) night and have the skin scared off me by their sonic despotism and desperate, narcissistic hostility. An album like IX Equilibrium is more something I put in the stereo to show friends just how dizzying this trio of Ihsahn, Samoth and Trym had become upon their individual instruments. Talented, technical and complex, I enjoyed the album more than Anthems, though it's still far from essential.