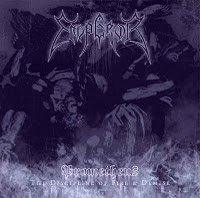 It's no accident that Emperor's fourth (and final) full-length would be branded with the title of Prometheus. Like the mythic titan, who stole fire for mankind and thus ushered in a new era of prosperity and innovation, Ihsahn had moved peripherally into a creative space which would stoke several new blazes of inspiration. Perhaps the obvious alteration to the core concept is that Prometheus is no longer resting upon the laurels of its black metal forebears. In fact, without Ihsahn's vocals (clean and rasped) drawing a direct lineage from the prior album IX Equilibrium, this might even pass for an entirely different band, so it's no wonder it was met with such a divisive and varied reaction from both the band's long-standing audience and extreme metal buffs all across the spectrum.

There was a lot less involvement from Samoth here, who was presumably quite occupied with his other, touring band Zyklon at this time, and you can notice a distinct change in the riffs. Gone are the primarily tremolo-driven, traditional black metal sequences and in their place what might best be described as a hybrid of progressive death and thrash metal. Dense grooves are backed up by explosive, intricate flurries of clinical mayhem, and the symphonic elements are dialed up from any of the previous albums, playing a more crucial and central role. However, Prometheus is remarkable at balancing these two halves off against one another, and Ihsahn and Trym keep the songs compelling throughout nearly the entire track list, exquisite in their detail. My earliest experiences with the album were those of lukewarm appreciation, having felt that the band were fielding a more varied alternate to IX Equilibrium, but unlike that work I have become more attracted to and appreciative of this material, and these days would rate it second in their rather limited pantheon of studio efforts.

Doesn't make a whit of difference to me if it's not 'the true Emperor', if we must consider this 'extreme prog metal' or 'ZOMG a ghey Ihsahn solo album using the established brand name'. When the music is this passionate and well written, I take notice. Interestingly enough, that same level of production and polish which failed to recapture the malevolence of In the Nightside Eclipse on its previous successors functions far better in the context of this material. It's sleek, modern and admittedly quite plastic in execution: a perfect fit to this more futuristic treaty on humanism and ambition, and if it must be said, a noteworthy transition into Ihsahn's first official solo effort The Adversary. Aesthetically, this is not the Emperor you'd likely encounter on some remote glacial mountainside, but one you'd find in the local psycho ward, having broken free of its rubber room and now tormenting the nurses and orderlies. An 'Arkham Asylum' of Norwegian extremity, mirrored by the video for "Empty" which transitions from forest to gurney and back again.

There's not one song on here I'd snub my nose at, but I certainly have favorites. One of these is "In the Wordless Chamber", a cathartic and symphonic surge of madness which culminates in this brilliant and hilarious warlike march (first at 1:30) above which these beautiful strings simmer and a horn blares, Ihsahn growling like a hag. Even more surprising is how the songs dissolves into this lush, tonal ambient sequence at 3:00, before Trym returns to pummel the listener which some of the most gut-rupturing double bass in his repertoire. "Depraved" is also a firm standout due to the schizoid arching and toiling interchange of the guitars; "Empty" a razor straight charge into the depths of emotional dissolution, harried and punctual mutes serving as an anchor to the pop of the maddening melodies. "The Tongue of Fire" also deserves mention for how well it incorporates the symphonic side of the band directly into the chugging undertow, plus the fucked up King Diamond higher pitch that Ihsahn revisits.

But trust me, they're all pretty fucking sick. Even if the individual riffing doesn't earn a 100% ratio of hits over misses, the fact is that not a moment goes buy of these 52 without something interesting happening, some stylish climax, many of which you can't hear coming from a hundred yards distance. And I enjoy the hell out of it. Prometheus: The Discipline of Fire & Demise is frankly more intelligent, engaging and surreal than most black AND death metal albums in its class, even if that comes at the price of having to clean up their studio sound simply so the listener can absorb all of the minutiae in the composition. Riffs, riffs and more riffs, colliding and retracting through a more cerebral and less confined space than any of their previous albums. A proficient and paralytic waltz of mockery. A swan song with Bedlam in its beak, electrodes wired to every fucking feather.

Verdict: Epic Win [9/10] (thus they clustered to the fruits of the earth)