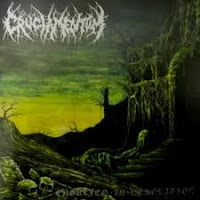 England's Cruciamentum are by far one of the better bands to emerge plagued and bloodied from that infectious time tunnel of 90s death metal, their 2009 demo Convocation of Crawling Chaos impressive in its ability to merge actual song structures with the meticulous worship of influences like Incantation, Bolt Thrower and Entombed, sans devolving into a dull, direct knockoff. Thus, I was pretty eager to hear what they could come up with next, and I've not the slightest inkling of disappointment with their subsequent EP Engulfed in Desolation. If anything, this only solidifies the band's potential to be the 'next big thing' in primal brutality, for it isn't just some stupid palette of derivative and uninteresting down-tuned drudgery dowsed in reverb to sound like it was born in a cavern with no actual riffs of worth in sight.

No, this is well written, dynamic death metal which is likely to thrill long-term advocates of the authentic nostalgia they hold so dear. What's more, the production standards are quite tight. Potent, clean guitars felt in the gut during the slower chugging sequences, but entirely capable of picking up the pace without losing any of their clarity, and the tone itself is not so polished that the music could ever feel sterile or plastic. Ominous, guttural vocals of the Incantation school, which, while not exactly original, are effectively menacing as they alternate between echoed, sparser passages and a more percussive, hostile meter. The drums here are also quite versed and flexible, with a lot of thundering warlike fills and steadier rhythms that feel as if they were built of the mud, blood and brick that confine corpses to the band's lyrical catacombs. However, by far the 'star' of this show must be the lead sequences, like that of "Thrones Turned to Rust" which is diabolically fleeting as it caresses the grimy substrate of the evil riff below.

Ultimately, you will hands down want to own this EP if you've been following closely this latest crop of nostalgic death metal acts arising from both sides of the pond. Regardless of whether you are more interested in the elder Swedish and Finnish tones being wrought by acts like Miasmal, or the direct Incantation lineage to the sounds of Disma, Vasaeleth and so forth, there is something here for you. Engulfed in Desolation is not flawless in its ratio of unforgettable riffing, perhaps, but the fact that it so effortlessly marries the libations to its influences with a strong, competitive studio sound should see it spurred forward in accreditation. Most importantly, these Englishmen have not forgotten that ages old, seemingly abandoned concept that death metal, like any other sub-genre, is first and foremost about the songs; that leaden, bludgeoning brutality is nothing without skilled pilots at the helm, and Cruciamentum have earned their licenses.