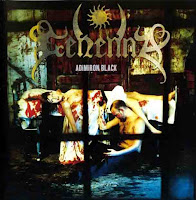 One mere month after teasing us with the Deadlights EP, the second wave, second tier outfit Gehenna would unleash their third studio full-length effort Adimiron Black. I don't think I'm exaggerating when I claim that this was their 'make or break' album. The Norwegians had shown consistent improvement through their first three Spells, and their status as a 'house band' for Moonfog Productions was all but set in stone, but they had yet to really breach the same audience that peers Emperor, Satyricon and Darkthrone had run off with, and it was up to this album to penetrate that broader base. Well, as we all know, that never really happened. Gehenna became somewhat of an underground fixture, praised by some and ignored by more, but not through any lack of trying, and while Adimiron Black shows a slight decline in creativity from their career peak Malice, it's at least a concrete outing with a handful of memorable songs.

Most notably, the band had largely abandoned the massive symphonic presence on the last album, which had by that point finally gelled with stronger guitar playing than the band's earlier releases. Adimiron Black is far more involved with guitars and attitude, and in this way it sort of reflects what Satyricon were doing with Rebel Extravaganza...only this is a better album. You will still hear some synthesizers courtesy of Sarcana and her replacement Damien, but they take a clear support role throughout the vast majority of the playtime, leaving only vague imprints on the title track, "Slowly Being Poisoned" and so forth. Blod proves an admirable replacement for the hard hitting Dirge Rep, who had shuffled off to potentially greener pastures, but Adimiron Black is truly all about Dolgar and Sanrabb strutting their growls and rasps all over their dense and compact riffing sequences, which run the gamut from all out Norse-blast to threads of thrash and slower, grooving passages.

And there are some admittedly engaging songs here. I've already covered "Deadlights", which was the centerpiece for the prior EP, but that's probably one of the least interesting here. "The Killing Kind" gets off a nice opening blast sequence before some chugging, thick thrash rhythms glazed in light synthesizers and storming Blod footwork. "Adimiron Black" itself is one of the strongest overall excursions, with a broad, eerie tinge to it that cedes to the thundering double bass and a slightly symphonic structure akin to what we heard on Malice. I most enjoyed the spikes of the cleaner guitar melody that were bounced about the cement of the rhythm section. Other rousing pieces here included the escalating "Seed of Man's Destruction" and the thrash outbreak in the bridge of "Eater of the Dead", but a few of the other tracks like "Devil's Work" and "Slowly Being Poisoned" were less appealing beyond a good idea or two.

There's a lot more chugging on the album, and while I'm not opposed to the technique if the formations of the muted notes are compelling, here it seems to be used too often as just a basis for aggression, a lurching stride forward into some better, faster rhythm, or oozing with the more orchestral adornments when and where they do appear. Gehenna essentially are 'dressing down' to 'dress up' and it just doesn't always create the intriguing atmosphere they had hopes. The lyrics here are also quite boring, derivative and lacking in truly terrifying imagery: a string of effortless cliches that seem as if they were relying on the homicidal grime of the cover art to somehow convey a deeper level. Otherwise, this is a pretty well rounded, polished release, good without ever eclipsing into greatness, a transitional step towards the more death and thrash inflected sounds of the following albums. A step down from Malice, and mildly less memorable than The Second Spell, but still worth hearing.