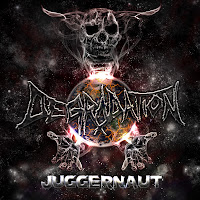 Degradation might not be one of the most compelling of the young US thrash groups I've heard in the past decade, but at the very least they seem like an honest group of guys attempting to recreate a style that had peaked over a decade before their inception. The Bay Area scene is the primary influence here in both the riffing and the vocals, with some clear nods to Exodus, Slayer, Metallica, Testament and Vio-Lence, and thus newer fans into stuff like Warbringer might get an added level of value from the album, but to be honest I found that the songs were somewhat inconsistent in quality, ranging from a middle-of-the-road competence to surges of excitement that really showcase their potential.

For example, the first two tracks ran straight through my attention span. The energy is there, and the note progressions adequate for the genre, but there was never anything explosive that really sought to draw me back for further helpings. And then comes "The Reckoning", which features a lot more classically inspired shredding in the bridge that helps push it over the top into the field of sheer, invigorating entertaining. Perhaps this is where the Testament influence shines into the writing, and wherever it appears on the album, the songs just seem so more vibrant ("Rise to Fall" is another example). To be fair, there are some nice clips of rapid, muted rhythm that kick some ass in the tunes "Trail of Sin" and "Degradation", but it's nothing we've not heard before configured into catchier progressions. The biggest surprise on the album is that they've included a cover of "Executioner...Slayer of the Light" from Swede death/thrashers The Crown *(Deathrace King, 2000), and come ot think of it, Degradation does remind me of that act's crisp, guillotine athletics in a few of the originals.

Alex Manske's vocals carry the same blue collar appeal that made James Hetfield such a success, a harsh bite with a dusting of melody, but it's also quite similar to Tom Araya's technique as of Reign in Blood and South of Heaven. All of the musicians are rock solid in their positions, with the rhythm section hitting like a hail of bricks and the guitars dancing all over them. The mix of the album is clean, perhaps too much so, with plenty of punch to the guitars, and atmosphere left to the momentum of the music alone. In summation, Degradation has all of the tools required of a class-thrashing act, but most of the songs fell short of thrilling or memorable. The vocal choruses all seem pretty average, lacking the immortality of a classic Metallica or Exodus track, and the riffing, while frenetic, never takes the listener by surprise. Juggernaut is a tight record, and points go to these gentlemen for not reveling in retro 'thrash' lyrical stupidity or making a joke out of the genre, so really all they need is superior songwriting and the possibilities might be damn near limitless.

Posted by autothrall at 8:02 AM