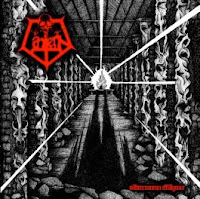 Lantern are another of these many newer bands who load on the reverb and perform a decidedly old school variation on the death metal genre. I've taken to calling the style 'cavern core', and I would certainly consider these Finns a part of that movement, however there are some individual characteristics to this EP that set them slightly apart from many of their peers. For one, they use quite a lot more blasted rhythms and tremolo guitars than many others who explore this subterranean nightmare niche, and thus one can detect a subtle hint of black metal coursing in their blood. Also, they create some unexpected and somewhat unusual patterns in the guitars like the melodies in the center of "Revert the Living into Death" which are functionally hypnotic, drawing the listener deeper into their world until each remaining light of hope is snuffed out.

Let's be clear: Lantern plays faster death metal in general. This is not some slow, sludging crawl through the spaces below, and it's not a direct Incantation or Autopsy knockoff like so many others in this field. You can hear traces of their Finnish forefathers like Abhorrence, Convulse and Demigod, with the broad, harrowing vocals one usually associates with early Entombed or their Swedish contemporaries of the 90s, maybe a fraction deeper. Saturated in reverb and dense, deep guitars whose rhythmic patterns often become lost in the atmosphere itself, they present a different option to those seeking underground escape from the tumult of their surface lives. I wouldn't call all the tracks here equally absorbing, but certainly "Ritual Unearthing" and "Slumbering Dying Dreams" have their moments, and some credit should be awarded that the Finns don't endlessly recycle themselves. The drums and guitars are solid, and they vary up the riffs just enough so you don't sink into sodden ennui.

Subterranean Effulgence is not quite the best of this style that I've heard in the past few years, but they do well to cross their Swedish and Finnish forefathers with the more ominous, archaic US influences. As a sampling of their ability, the EP proves the band has the dynamic range and chops to possibly survive when this whole tide boils over and people have moved on to the next wave. I kind of enjoy their simplistic logo, cover graphics and the morbid, funereal lyrics. They could probably mix in a few extra, slower rhythms to great effect, but I laud their ability to craft their serpentine, bewitching melodies above the darkened din of the rhythmic structures, and thus am looking forward to a full-length. In the meantime, I'd urge fans of groups like Miasmal, Entrails, Cruciamentum, Grave Miasma and so forth to dig around for this and see what they think.