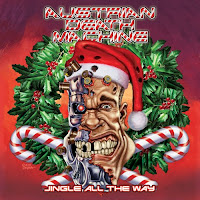 It's a digital single, with an extremely limited physical release with bonus track in tow. If we're lucky, proceeds from this might end up in some charity, for those suffering the handicaps that the creator of Austrian Death Machine also seems to harbor. It dirties me just to think a thought like that, but what I'm getting at is thinly veiled code for: this completely sucks. Granted, Tim Lambesis probably did not intend for this to ever be taken seriously, but the joke has now grown tired and old to the point where lichen has grown upon it, and its delivery was never very amusing in the first place: lift samples from Arnold Schwarzenegger films, apply them to badly written metalcore breakdowns and wholly forgettable modern 'thrash' riffs, awful growl vocals and profit off anyone whose standards are so absent that they'd actually get a chuckle out of it.

As you can no doubt tell, I was not a fan of either Total or Double Brutal, the Austrian Death Machine full-lengths to this point, some of the tritest gimmickry and unfunny nonsense I've come across in the past few years. Unfortunately, what I'm hearing on this holiday single is even worse than those efforts, 100% void of ideas or even compelling derivations. Factory produced, plastic poseur manure which can't even evince laughter in any ironic sense. This isn't so bad that it's somehow miraculously fun or entertaining, it's just bad. "I'm Not a Pervert" switches off from bad, brickhouse Pantera groove chugging and Anselmo vocals to vapid growling and groove breakdowns for the LCD, and about the only thing that I can say is not completely detritus would be the leads, which might have deserved placement in a far better song. "It's Turbo Time" is hardly any better, with almost a NYHC undercurrent to the angry Sick of It All vocals and the faster paced crossover/thrashing with such dull, repetitive and pedestrian notation that I might have nightmares just thinking of it...

And then, that breakdown with the shouts? Forget about it, what a terrible lack of creativity. A faster, but more methodic lead is shoved in here at the last minute which isn't even as compelling as the other one. The final track, "Who Told You You Could Eat My cookies?" is slower paced, functioning on a foundation of effortless asshat grooves with spikes of arpeggio leads above them, but even if it's mildly less shit than the other tracks, it's still fertilizer. None of the mock Arnold samples anywhere here are funny anymore. In fact, I fail to see why I should even be laughing at 80s action hero films when it's not like I can head down to the theater these days and see any that are really any better. We might have CGI and 3D now, folks, but most of the shit still sucks, and even worse, because no one seems to have learned from their 'mistakes', they've just shifted over to making new ones. Anyway, what's left to say? If you enjoy sterile, generic metalcore breakdowns and Vulgar Display of Power thrash bursts that Lambesis himself probably forgot three minutes after recording them, eat your heart out: You are terrible. THIS is terrible. Just connect the dots.