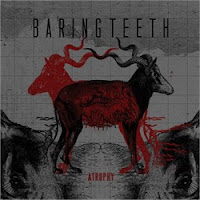 Willowtip Records is generally associated with the more technical and spastic side of death, grind and metalcore, so it was with reservations that I decided to check out the debut Atrophy from Texas hopefuls Baring Teeth. I'm not a huge proponent for music that sounds like a bunch of monkeys looped to IVs of crystal meth and testosterone, but every now and again I'll take a bite into such controlled chaos, and with Atrophy, I was surprised to retain both my composure and sanity. Essentially, this trio exudes a sense of mathematical, spring loaded efficiency that they've loaded up into a dynamic palette of cautiously sculpted dissonance. I suppose much of the music here could be labeled 'mathcore' or 'math metal' or whatnot, but the brute vocals and general aggression place it well within the sphere of the technical and progressive death artistry.

In particular, I was heavily reminded of the Canadians Gorguts' unhinged, 1998 shocker Obscura, only that seemed to deceptively operate along a looser structural axis than this album. Baring Teeth doesn't seem interested in an improvisational architecture, though the spurious nature of their riffing might often cast that illusion. While the plunking bass lines and drums are incredibly dynamic and well-practiced, the central focus here rests upon the dissonant, often dreary guitars which mold an atmosphere of reflection and hostility. Songs like "Atrophy" itself, "End" and "The Dead Hand" all feature zippy, cathartic sequences of textured, jangling notes that keep the listener affixed as if he or she were observing some trapeze artist routine. I admit I was more impressed when the band explored a greater level of detail and variation, as with the slower, drawn out passages in "Distilled in Fire" or "Scarred Fingertips", but my favorite chunk of the album is the bridge between "Distilled..." and "Vestigial Birth". Here a simple, hypnotic bass line thunks along to the jazzy drumming, soon glazed in waltzing, eerie guitars.

Reminded me of something the Salt Lake City artcore band Iceburn might have churned out back in the 90s, and I almost wished there were more such breakdowns on this album. I was not always enamored of the bouncier, clown-like rhythms they manifest in several of the songs, so when they give their writing a chance to breathe, like the sheen of atmospheric guitars over the slow paced drums in the staggering 12+ minute instrumental finale "Tower of Silence", it becomes far more engrossing. I also was not feeling the vocals so much. Standard, functional broad gutturals, sure, but rather subdued and monotonous next to the flexibility of the guitars, though they'll occasionally accent them with some angst-ridden bark in the backdrop.

That said, Atrophy is not a bad record. Baring Teeth have captured a pretty good range of tempos here, and never dwell on any one for an excess of run time. The boxy, organic tone of the guitars is well suited to the style, and fans of the aforementioned Obscura, post-hardcore influenced tech death like recent Ulcerate, or the more mathematical, rhythmic side of Converge, Botch and Dillinger Escape Plan might want to give this a whirl.