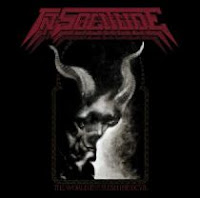 In Solitude is one of a trio of Swedish bands who have unearthed a striking similarity to Danish legends Mercyful Fate. Seeing that all have found a rather high profile home (both this group and Portrait signing on with Metal Blade), one might discern the formation of a trending, or 'hot' sound. This is not to take credit away from these acts, who are all good for what they do, but The World. The Flesh. The Devil tends to play it pretty safe, and it takes a few songs for anything really interesting to happen. Having grabbed the album this past summer, listened a few times and then put it away, I decided to dig it back out and see how it's aged with me, but I'm sad to report that the impact is about the same: good, but really nothing special in the end, slightly short of the band's debut. Perhaps a little of the zeal placed in this band (and album) is borne more of a nostalgia for the beloved, rare sound they represent rather than the actual quality and memorability of their songs.

Now, I doubt anyone could accuse In Solitude of directly aping their Danish masters, because in truth the majority of semblance comes from the vocals of Pelle Åhman, whose vocals mirror the mid-range, wavering howls of King Diamond, with perhaps a dash of James Rivera in how he sustains the end of his phrasings. He's got this style locked, but unfortunately he lacks the dynamic range, falsetto squeals and cheesy but endearing narrative that Petersen is known for (more on his solo albums, perhaps). As a result, a lot of the verse structures and the chorus sequences in these songs feel pretty samey and unremarkable, even if his tone is not unpleasant upon the ear. Thankfully the lyrics are quite interesting examinations of haunting vices and occult concepts, so this helps a lot in gluing ears to Pelle's guidance atop the cruising, mid paced chord batteries, but I felt that by the time the record was half over, there was very little nuance in the performance and the 14 minute finale "On Burning Paths" didn't deviate far from the titular opening track.

Musically, the Swedes diverge somewhat from the precise riffing climate of their prime influence. Unlike their countrymen Ghost, In Solitude do not dabble much in 60s or 70s psychedelia as a basis, but instead charge along the well trodden path of hard rock and heavy metal pioneered by the NWOBHM movement. Maybe some Angel Witch, UFO, Priest and Deep Purple, or forefathers in the Swedish scene like Heavy Load and Proud. Certainly songs like "We Were Never Here" and "Poisoned, Blessed and Burned" have an air of eerie sadness to them that resonates the Fate/King Diamond atmosphere, but others like "The World the Flesh the Devil" or "Demons" have a bit of Maiden pomp, and some, including "To Her Darkness" hone in on a hard rocking, central strut that feels even more archaic. All told, though, these guys come up with functional, workmanlike guitar lines. Not all are created equal, and few distinct unto themselves, but in tandem with Åhman's straightforward, soaring tones, they get the job done.

The album does tend to work against itself in terms of consistency, because I found the closing pieces like "Dance of the Adversary" and "On Burning Paths" to be its strongest, the former with a lot of Romantic charm and mystique to the bridge melodies; the latter simply offering a far more varied and adventurous side of the band that isn't explored on the shorter pieces leading up to it. Worse, though, is the almost utter lack of memorable chorus hooks. Instead of sugary, ear bleeding climaxes, the vocals rarely feel any different than the verses, and thus is lost one of the major hallmarks of all the old school acts this one desires to offer libations. For some, The World. The Flesh. The Devil will surely get by on its nostalgic virtue alone, and yet with such a primary component missing, this is not something I can envision myself returning to repeatedly, whereas an album like Enforcer's Diamonds has both the hooks AND the retro appeal. In Solitude has raw potential, it just needs a little more time to sizzle on the hellfire grill before served.