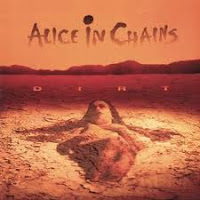 By the time Dirt was released, the Seattle grunge scene was in full swing. Nirvana had blown the doors off with their chart-topping Nevermind, and other bands, such as Pearl Jam and Soundgarden, were beginning to find themselves in the spotlight with their respective seminal works, Ten and Badmotorfinger. Released over a year after the aforementioned albums, Dirt lumbered onto the scene like the coked-up family member showing up late to the reunion. Dark, dirty, and desolate, Dirt is an exercise in exposing and exploiting the demons that lay nestled in the band’s collective conscious. Without a doubt the bands most definitive work, the album takes the listener through every twisted corner of Layne Staley and company’s psyche, and never pulls its punches. Much of the hard rock aesthetic present on Facelift is dropped here, choosing to instead to dig into sludgy riffs that limp through odd time signatures. The entire album becomes a rather unsettling look into the mind of an addict, with Layne Staley’s lyrics forming a simultaneously grating and enchanting synergy with his distinct voice. Add to the mix guitarist Jerry Cantrell’s own singing and pummeling guitar playing, and I would argue you have a singer-guitarist duo to rival the likes of the greats. The rhythm section, once again composed of bassist Mike Starr and drummer Sean Kinney, provides the ever shifting but always-solid backdrop to the proceedings.

AiC once again pulls no punches with its opening track, diving right into the off-kilter groove of “Them Bones”, with Staley starting things off with a distinctive bark. The riffing on display here is exceptional, with a driving energy that sinks its teeth in and doesn’t let go. Cantrell’s solo is one of his finest, taking a similar trick from “Man in the Box” by playing what feels like two distinct solos from two players, but at the same time achieving a cohesiveness that boosts the song into the stratosphere. The listener will notice by the first song that the band has not sounded better up until this point. The guitars are fuller, the vocals are at the forefront and clear, and the rhythm section has a low-end growl and thump that was not present to the same degree on Facelift. Again borrowing while also tweaking the template laid out on Facelift, the second song is another riff machine meant to kick your ass and show you the band is back with an even sharper edge. “Dam That River”, by far one of my favourites, chugs along at a brisk pace, leading up to a killer chorus and solo. By this point, Dirt has my full attention, taking the sound established on Facelift and crafting it into something bigger and better.

Things slow down on the acid-trip grind of “Rain When I Die”. A plunking bass line leads into a whammy-bar/wah-pedal solo that sounds like the kind of thing you would hear after a night taking a hit of everything under the sun. The guitar melody is classic Cantrell, combining the expression of the wah with eccentric phrasing that formulates his sound. The vocal harmonies at 3:22 are the perfect example of the trademark AiC developed over their career. Beautiful yet haunting, harmonious yet dissonant.

Three of the following four songs all display the very bleak atmosphere that permeates the entire album, like a layer of filth that accumulates in a home long abandoned. “Sickman”, “Junkhead”, and “Dirt” all dig straight into the mind of the bands iconic vocalist. “Dirt” in particular features Staley lamenting, “I want you to scrape me from the walls / And go crazy like you've made me”. The lyrics present the musings of a man who feels disgust with what he has become, but can’t pull himself away from it.

Backtracking a bit, we get a little personal with the other side of the vocal duo with a tribute to Cantrell’s veteran father, “Rooster”. One of the more radio-friendly songs on the album, the song features an incredible chorus courtesy of Staley’s signature pipes. You can’t help but sing along, “You know he ain’t gonna die!” Fucking killer stuff.

The next two songs, “God Smack” and “Hate to Feel”, are not songs I find myself coming back to often. They feel similar at times to what is heard earlier, but this is not to fault the songs themselves. They portray the same kind of self-loathing and drug-fueled insanity that is obvious on the first half of the album. But as it stands, I personally don’t find much reason to come back to them. “Angry Chair”, on the other hand, makes its presence known with a stomping drum line, followed by an ominous guitar melody. Another personal favourite, it grabs me from the get-go. The start-and-stop pre-chorus is a highlight, with some heavy-as-fuck power chords pounding you into submission. Angry indeed.

The albums one true ballad, “Down In A Hole”, exemplifies AiC’s knack of being able to combine an elegant grace to their gritty subject matter. Sorrowful to the nth degree, the song still manages to uplift the listener by the end of it. One of the strongest tracks on the album, it provides a moment of calm before the storm. And by storm, I mean Dirt’s crown jewel, the juggernaut “Would?”. By far the best song on the album, and one of the bands single greatest tracks, “Would?” has it all: a subtle bass intro, drums that thunder and stomp, and a kick-ass chorus combining guitar and vocals for something far greater than the sum of its parts. The interplay between Staley and Cantrell in the verse is haunting, with a foreboding guitar part becoming an instantly recognizable sound of the grunge scene. It’s a perfect way to close a near-perfect album, and I can’t see myself failing to enjoy it any time soon.

So, as you can tell, I find Dirt to be an intriguing and exceptional experience, but not one without its faults. There are times where I find the bleak and drowning nature of the music and lyrical subject matter to be too overwhelming. The album oozes atmosphere and almost leaves you reaching for something to clean yourself off with. Some of the songs are a little similar in how they go about things, and the album suffers a little for it. With that said, the album is the bands definitive work. Tracks like "Them Bones", "Dam That River" and "Would?" are mainstays of the bands setlist to this day, and for good reason. This is the band at its peak in terms of songwriting and honing their sound. This is the place to start if one is looking to explore one of the dirtier bands that rose to prominence in the grunge scene. But, for all its fanfare and praise, I cannot bring myself to declare it my favourite, nor can I give it a perfect score. Listen to it anyway.

Posted by GreasyKidsStuff at 12:42 AM