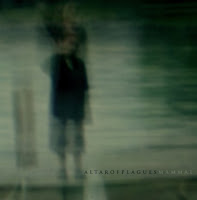 Words of advice: when you're going to kick off your album with a 19 minute long track, make sure you front load it with some interesting material, or at least some sense that you'll be escalating towards such. It's this very tedium which offers a crippling initiation unto the Altar of Plagues sophomore Mammal, and a flaw that I've found difficult to circumnavigate in subsequent returns to the material. Sure, I can just skip this track and move onto the fluffier, marginally superior remainder of the disc, but it's presence alone ensures that my overall relationship to the Irish band's latest will be fleeting at best. A shame, really, because I've liked much of the band's work up this point, and in particular White Tomb proved a promising specter of spacious, urban black metal which directly addresses the cracks in civilization.

Now, it's not solely that Altar of Plagues compose such lengthy songs that is the problem here. They've done it before, and Mammal has the same four-track configuration as its predecessor. But where White Tomb had this gripping, dark miasma about it that slowly suffocated and drew the listener into its callous concrete folds, "Neptune is Dead" does next to nothing. Ambiance begets a cyclic two note progression that remains the same through the oncoming blast beat, and we're subjected to over three minutes of sameness until another minimalist sequence ensues. Of the 19 minutes of this song, there are maybe two points where it's not empty and droning: the warmer melodic sequence at about 5:30 and the more frenetic tremolo after the eight minute mark. Both are decent, but really, in a song this swollen shouldn't we be able to except something truly amazing to happen? It doesn't.

The rest of the album. Not too shabby. I like the dense, sludgy guitar tones in "Feather and Bone", and the steady muted thrash sequence above which the angst laden vocals bark out and tiny, spooky guitars pan out almost like incidental pianos in a tense horror scene. There's also some tapping in there reminiscent of Gojira, with cleaner vocal accompaniment. The wailing ethnic vocals that open and close "When the Sun Drowns in the Ocean" are compelling, as is the use of creeping strings and looping drums, though this should largely be considered an ambient piece. And "All Life Converges to Some Center", the last and second longest track is somewhat emotional and expressive black/post-rock sludge with a brief electro-noise finish.

Mammal isn't all that bad, it just takes too long to get anywhere, and much interest is lost in the waiting room. Fans of spatial, wide open post-rock or shoegazer black metal like Deafheaven or Lantlos will undoubtedly find this an absorbing experience, but then for many such folks you could simply juggle 2-3 notes and apply feedback and rasping and it would seem a Renaissance. In truth, despite its few appreciable moments of warmth and texture, this is naught more than the law of averages, a 52 minute journey into emptiness. The lyrics are decent, using a streamlined conceptual appeal (I like the 'horses are rapid and ready' line refrained in two of the tracks), but the vocals delivering them aren't particularly effective. Ultimately, I just didn't wring out the same level of immersion here that I did with the debut, and the appeal of these Irishmen might have reached its plateau.