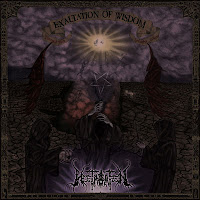 Hetroertzen is a formerly Chilean black metal entity now located in Sweden, which has continued to elevate itself through each of three full-length recordings in the past decade. Exaltation of Wisdom was its fourth album, originally released in 2010 but given a lavish new treatment through Barghest records. Remixed, remastered and all decked out in an extravagant package with (largely) eye catching artwork and lyrics, it's apparent that the label and band are really concerned with its aesthetic value, and they should be: this is a tight execution, an album clearly rooted in the traditions of 90s European black metal, but dowsing its blasted visage with loads of resonant atmosphere through the guitar tone.

The vocals fall somewhere between the standard black metal rasp and the more garbled and decrepit tones of, say, Inquisition, though they often apply more ominous or salacious backing rasps and growls that help add to the cavern-like ceiling created by the guitars. Most of the riffs are steady, tremolo-driven processions of chords which are injected with glimmers of haunting, enormous atmosphere due to the glint of higher, ringing notes amidst the roiling murk, and some examples of this would be "Like the Serpent" or "Perpetual Eclipse Stigmata". However, this is not some one trick record, and the band will often lapse into a darker, doomed pace ala "The Final Break of Mankind" or the bridge of closer "The White Priestcraft". Hetroertzen prides itself on a particular, hypnotic effect through the airy, harrowing curvature of the guitars, and I feel that this often transpires at the expense of the individual riff-strength, but if you're turning to this genre more for its atmosphere than muscle, Exaltation of Wisdom functions admirably.

I did quite like the setup for this album, in particular the contrast from the swelling ambient intro "Incinerating Illumination" to the charging turmoil of "Like the Serpent", to the extent that I would not have minded some more pure ambient breaks throughout the various tracks, but this is something Hetroertzen have front-loaded for the album. There are certainly a few cuts that exceed the 10 minute mark, and though this is not accomplished through mass repetition they do tend to drag their feet along, offering few incendiary thrills deep in their midst. However, the production is quite strong, the lyrics sinister and introspective, and the overall package one that should peak the interest of those seeking a more cavernous alternative to the standard, raw necrosis of the genre. Fans of acts like Xasthur, Pestilential Shadows, Aosoth, Blut Aus Nord, Leviathan, or the latest crop of ominous, reverb soaked retro death would likely find something to enjoy here.