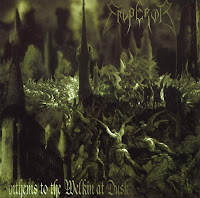 Anthems to the Welkin at Dusk is an important album to a great many persons, and this is not now or ever going to be in question. In fact, for tens of thousands of extreme metal (and hardcore) fans, this was undoubtedly one of the first albums in the black metal genre that they had experience with, alongside Enthrone Darkness Triumphant and Dusk and Her Embrace. It arrived at a time when Emperor was the band with the most impressive momentum and potential out of the Norwegian crop, poised on the edge of a far broader success, and thus more or less NEEDED to inspire thousands of imitators and accumulate breadcrumbs on the tables of various record execs. To that extent, I don't think anyone can deny that these Anthems were working as intended. On the flip side, though, the band was so hyped by this point that they could have released a disc of ABBA covers with Ihsahn rasping the lyrics and it would have sated the starved bellies of their overflowing bandwagon of followers.

Personally, I found this to be a monumental disappointment after In the Nightside Eclipse had soaked my mind and terrified me for a number of years. I imported the European edition, and spent time absorbing the artwork and lyrics before even attempting to listen through the disc, discovering the well written prose of ritualistic self-empowerment which so accurately mirrors and defines the many lost souls who listen to this stuff (I'm not excluding myself). When that time arrived, though, to experience Anthems in full, blaring out my speakers, I was astonished to find that so little of the album would stick for me. Repeated spins would not yield different results, and I've now spent well over a decade scratching my head at its overwhelmingly positive reaction. Like Death's Human, or Morbid Angel's Blessed Are the Sick, it's one of those paragons of extreme metal which seems to have laid the seeds of supplication in just about everyone I know, excepting myself. Hell, I have known folks who consider this the apex of its genre...and I'm sure we all remember the various magazine polls that placed it as one of, if not THE greatest singular achievement in metal music to its day!

Bollocks, all of it. Anthems to the Welkin at Dusk might have won its spot in the hearts of many newcomers to its medium of expression, and it might indeed be a finely honed piece of work in terms of raw production value, but this in no way surpasses In the Nightside Eclipse and in truth I found it to fall short in many areas. Not the least of which is the almost complete dearth of haunted and vile atmosphere which made that debut so beloved and resonant. This is no stylistic departure, mind you. Anthems is basically a tidier, polished answer to its predecessor, with the addition of a metric ton of clean, soaring vocals which are assumed to expand the sound, but never really prove anything other than the fact that Ihsahn can actually pull them off. Lots of structured blast sequences, orchestration, and dynamic versatility are strewn throughout, and one can certainly praise Trym for his unbridled energy and importance to the band's celerity, but when there aren't that many scathing and memorable riffs to support, even he often comes off as some soulless, muscular metronome.

The main problem, as I hear it, is that with the possible exception of "Ensorcelled by Khaos", the entire first half of this album is about as impressive as watching your lawn grow. "Alsvartr (The Oath)" cycles from acoustics and hooting owl samples to whispered, self-aggrandizing narration over the onslaught of bombastic synths and circular guitar melodies. The actual note progression is playful enough, if predictable, but even the various hisses and rasps off in the distance fail to manifest the level of intimidation this was meant to represent towards the listener, so when the King Diamond wails and storming, blast-thunder of "Ye Entrancemperium" arrive, one is just happy that "The Oath" is over. Unfortunately, this next tune itself is pretty much a poster child for how technical performance and speed do not equivocate memorable music. All of the guitars, with the exception of the unnerving sway at around 2:00, sound like zero effort was placed in their construction, just sheer speed, and the keys and clean vocals also zip through one ear and straight out the arse.

"Thus Spake the Nightspirit" is mildly more measured and grandiose, but it too cedes into this vapid blasting, and the spikes of melodies curried through the guitars are less than ideal; and while "Ensorcelled by Khaos" tries pretty damn hard to excel with the opening tremolo riff and the somewhat catchy symphonic progression deep in its verses, it still seems to lack that tangible darkness and tyrannical violation of In the Nightside Eclipse. No, it's not until "The Loss and Curse of Reverence" and "The Acclamation of Bonds" that I felt the grasp of diabolic witchery finally wear down my senses. Ironically, a song that I described as two minutes of excellence in a six minute shell (on the Reverence EP) positively sparkles next to most of this album, it's initial blasted momentum transitioning towards an admittedly superb tremolo riff and later an almost jazzy, textured symphonic sequence. "The Acclamation of Bonds" is also worthy for the flights of racing melodies and their interplay with the ghostly keypads later in the run time, but I still would not put it against anything on the debut album.

Just when I thought the album was getting decent, of course, I was struck with the eight minute slog that is "With Strength I Burn", which showcases a lot of the clean vocal harmonies astride what must be the least interesting set of riffs on the whole album (slow and faster paced). Quite disheartening, and not in the 'good way' that I expect from an effective black metal piece. I've covered dozens if not hundreds of albums with similar songs to this: inflated to the point that they escape the wielder's hands to the clouds, only to wound up impaled on an airplane propeller. Finally, it's sad that the sweltering, dense emotions of the central guitar line and synthesizer in the closing instrumental "The Wanderer" are more memorable than about half the full length lyrical songs on the album...but that is, indeed the case.

Clearly, Emperor were firing on many cylinders when they sat down to write this material, but the strength of the band's arsenal amounts to little more than saber rattling here. Where In the Nightside Eclipse captured its fell glories in a frozen sculpture of menace, this album seems to embrace the pageantry of speed and musicianship without the impeccable undercurrent of evil. Anthems to the Welkin at Dusk was in the right place, at the right time, and I think that explains much of the veneration it received (or receives). But the music itself should no way be entitled to such admiration, because it's just not that great, no matter how fast the drums and guitars are, no matter how entwined the textures of errant melody and faux orchestration. An important album chronologically for its ability to open the rabid floodgates of fandom, but not nearly the masterwork some would have us believe. Average, surging symphonic black metal with only small glints of brighter craftmanship on the surface of its dull blade.