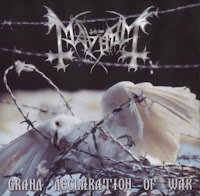 For Mayhem, Grand Declaration of War was THAT album. You know, the one that nearly every Norwegian band releases to the dismay of a fraction of its fanbase, provoking cries of alienation and disrespect, spurned lovers wiping tears from their eyes as they turn their backs on the present and commence endless cycles of fellatio with the past. Yes, THAT album. Sure, some might argue that this had already occurred with their previous EP, Wolfs Lair Abyss. Hell, a handful of people will tell you that they sold out on De Mysteriis Dom Sathanas, but I think at large, Grand Declaration brought a lot more change in the band's songwriting than any of their other major works. As for myself, it took a few spins to really let the album sink in, but I laud the band's ambition and experimentation here. As much as I do like it, I've never thought of De Mysteriis Dom Sathanas as a remarkable or top shelf album from this scene, so I've never had any aversion to their shifting compositional landscape.

Essentially, this a grand, philosophical exposé against Christianity, a Nietzschean rally against weakness, and I daresay a convincing argument. Maniac had decided to incorporate a wealth of spoken word passages that more clearly deliver the messages, and this was first distinction that the audience will be slapped in the face with. I rather admired the technique, it's sort of like a political and ethical speech set to metal, a Winston Churchill for the Abyss. Often these are set against a series of salacious, traditional rasped vocals for an odd effect, and I can see where this might turn some off. But if there was one gripe I actually had about Maniac's performance here, it would be the constant elevation of pitch near the end of many of his clean lines. It eventually grows a little cheesy and predictable. Where it actually comes across the most poignant is in the interlude track, "A Broadsword and a Colder Sun (Part I of II)", where he whispers the prose with some added distortion.

But this is not the only difference you'll find between this and the earlier albums. Blasphemer's performance is my favorite on the entire disc, and it's here that in my opinion the guy has really earned his keep with this band. Clinical, technical and incredibly dynamic, he tears along these varied courses with crisp, fulfilling tone, and it's fascinating to follow his the splicing of his rhythm tracks. There's a surgical penetration to this material that wasn't present on Wolfs Lair Abyss, and tracks like "Crystallized Pain in Deconstruction" and "In the Lies Where Upon You Lay" are saturated with superb riffs and nuances. In fact, I'd go so far that he's channeling a bit of tech thrash from the late 80s, ala Watchtower or Deathrow, and it runs marvels as a contrast to the pomp of the vocals. Probably my favorite guitars on any Mayhem album, to be honest. The rhythm section also deserves mention, particularly Hellhammer who proves he's as great at jazz or progressive rock percussion at blasting (I found Necrobutcher more interesting on Chimera).

There is yet another layer of experimentation on Grand Declaration of War, and that comes in the pair of two of the band's most eclectic cuts to date. On "A Bloodsword and a Colder Sun (Part II of II)" they create this mesmeric electro/industrial piece with whispered vocals, light thumps of bass and these great, fading and rising guitar patterns behind the pulse of the synthesizer. I can see half of their early 90s audience heading for hills within 30 seconds of the opening, but as a fan of all manner of electronica, I rather liked this even more than several of the metal tunes. "Completion in Science and Agony (Part I of II)" is another bizarre standout, a hybrid of black metal, classic doom and even some progressive rock, Hellhammer turning in beats that remind me of some of Fates Warning's stuff circa Perfect Symmetry with Mark Zonder. The vocals are freakish, a pair of arching and unnerving melodies in which Mayhem is joined by Øyvind Hægeland of Spiral Architect (and numerous other bands), and I really dug the minimal electroscape near the end.

Like a white avian ensnared in barbwire, I found myself glued to this album's eccentricities, and took no real issue with its deviations from the predicted, or expected. Most of the larger names in extreme metal delve into the avant-garde, and Mayhem deserve some credit for doing such in a daring exhibition that no one had really tried before. Sure, progressive rock traits had been incorporated into other such albums, and spoken word passages, but never assembled with this precarious a balance. Grand Declaration of War is not perfect by any means. I've already noted how the spoken vocals can grate on the ears due to their pitch, and the guitars do not feel 100% inspired in their entirety, but nonetheless this is a curious collection of compositions that in no way plays it safe.

Verdict: Win [8/10] (all that proceeds from weakness we loathe)