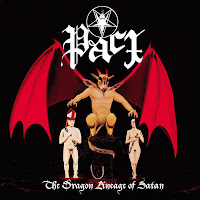 Once a haven for hope, prosperity, the Declaration of Independence, the Liberty Bell, and one of the highest Amish populations in the U S of A, Pennsylvania has now become the haven for derelict demons like those that congregate to Pact for the devil's business. It's a new band, to be sure, but founded upon the principles of sadism, nihilism and some of the oldest, crudest sounding floes of black desecration I've lately heard in my country. You could qualify this as 'orthodox' black metal in so far as its loyalty to the genre's underlying precepts, but The Dragon Lineage of Satan is not necessarily derivative from any one scene or band. They bask in a raw climate of violence and vile energy that venerates anything from Canadians Blasphemy to the Norse rush of the early to mid 90s, but in doing so they manage to distinguish themselves from a variety of doppelgangers.

Pact is aggressive and abrasive straight out of the infernal starting gates. You will not find any ambient filler tracks, or sweeping orchestral inaugurations. They burst into the crass conjuration of "Litany to Satan" and then never look back. That's not to say they always move at the same, rabid step, but this is a guitar that seeks to bathe its audience in sinister distortion as much as possible, with the only room to breathe coming in the form of hellish ash-clouds. What truly stands out about the record is the mix of terrifying rasped vocals and the ripping guitars, which create these mass walls of internal discord that make them sound uncanny even for such an extreme musical outlet. I felt that there was something in common here to sounds of the more dissonant, atmospheric death metal acts like Portal, only applied to the more straightforward blasting of the black metal genre, and mildly less alienating.

A few of the tunes like 'Ecstasy and Illumination" even incorporate hoarser growled vocal tones to add breadth, and the guitars on tracks such as "The Middle Pillar" and the chugging, cavernous "Suicide Sigil" feel like the convergence of some cloud of abyss-wasps intent on plunging their stingers deep into the psyche of the listener, drawing forth all his/her hopes and replacing them with the band's lyrical rantings inspired through Nietzsche, Crowley, and Kant and other 'colorful' poets and philosophers of olde. Not for a moment of the 46+ here will you feel comfortable, and the paint peeling production, which feels like it's being channeled through a sewer of daemonic offal, only enforces the music's caustic finality. I just rubbed my magic 8 ball, and have determined that the outlook is NOT SO fucking good, humanity. The Dragon Lineage of Satan reminds us of why we check twice at the shadows surrounding us, for what truths they might conceal. Why we feel like beasts at the pinnacle of lust. And why we may never be ready to bathe in the light. It's not perfect structurally, but an incendiary debut.