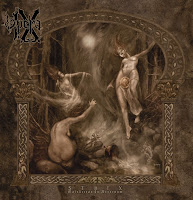 When I think back on the legacy of Opera IX, I think largely of candles, spells and rituals obscured in the ancient architecture of Rome, or of Italy at large. The band has always captured that pagan heritage, with lavish symphonic compositions and a good deal of variation in pacing. But that being said, their 'classics' like Sacro Culto and The Call of the Wood have not quite held up for me through the years, and I don't often feel the call for their particular charms. When the band parted with Cadaveria, one of the more distinct and unique female vocalists in all extreme metal, many had probably written the Italians off for dead, and their ensuing records were admittedly even less appealing than their forebears... Maleventum and Amphisbena were still a Gothic/black hybrid but rarely that memorable.

Fast forward to an eight year hiatus, and the band has returned with it's 6th full-length Strix Maledictae in Aeternum, once more with 'M' as the vocalist. Surprisingly, this is a very lush and attractive album, fully in league with their better past efforts, and possessive of an excellent pacing and narrative structure which overcomes its staggering, 70 minute existence. You can expect all of the usual traits: creepy symphonic/Gothic intro ("Strix the Prologue"), spacious and atmospheric black metal dowsed heavily in pianos and acoustic segues, broad growling rasps and a lot of sluggish, almost black/doom pacing interspersed with rapid breaks. Where they go for a more theatrical approach, like "Vox in Rama", they continue to prove competent at creating the stage-like atmosphere that their band moniker implies, and in general I found that the crashes of percussion and the more orchestral synthesizers here were entirely well implemented, balanced off against the metallic structures "1313" and "Mandragora".

The downside here, and this is also a common gripe I have with similar entities like the British Cradle of Filth, is that the orchestration and setup of the songs often supercedes the actual guitar riffing. Not only for their brighter tones, but just that they do little more than follow along, never superimposed OVER the atmosphere, but riding along under it to the drum beat. Granted, this itself often involves some practicality and variation, and the riffs are not exactly boring, but I wish there were a few more moments on the album where they would break out some intense, inherently memorable progression of notes rather than submit to the merely expected. I am a huge proponent for symphonic components in metal music, but never at the expense of those core metal values I've firmly supported since the late 70s and my own youthful exposure to the traditional bands.

But even then, Strix is hardly a crippled experience. It was a fairly pleasurable listen despite this structural hindrance, and for the most part never grows dull, even if a lot of the songs move at comparable paces with similar instrumentation. Think of this as a broad, occult ritual captured in some catacomb while you gaze on from a stone, ivy-strung balcony, offering applause where the twisted tales dictate. It's probably the best Opera IX effort since the first few, even if the vocals don't have that same distinct character, and the band doesn't broach the confines of their stylistic safe zone.