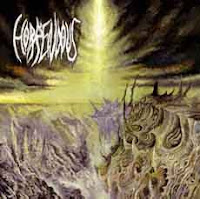 Horrendous seem to have tapped into my subconscious and then extracted exactly what I want out of an old school focused death metal album in the modern era. Loads of atmosphere, growling and riffing circa the Floridian forebears like late 80s Death or the Dutch maestros Pestilence from the same era. Voracious, wild leads and oodles of melodies being constantly strewn out into the bleak and apocryphal, rotting skyline implied on the cover art. Ghastly vocals which fall somewhere between Chris Reifert, Martin van Drunen and Chuck Schuldiner. And a raw, ripping Swedish style guitar tone but none of the generic D-beat rhythms that seem so redundant from that scene and its many international doppelgangers.

The Chills might not have the riffing and chorus capabilities that made albums like Leprosy, Cause of Death or Consuming Impulse permanent, legendary fixtures in my cranial death metal arboretum, but it certainly comes within a cunt-hair's breadth. Naturally, the band does not attempt to hide its influences, proudly wearing them on its sleeve, and like almost anything you will hear in the 21st century, there's some implied amount of derivation. But nostalgia is not an invalid catalyst for aural pleasure, and to the credit of Horrendous, they do manifest some of their own marginal nuances about the resonant atmosphere, like those aforementioned melodies that go screaming and cavorting over the tremolo charges that you're not going to hear on a Scream Bloody Gore or Slowly We Rot. They're also masters of pacing here, and thus The Chills is structured near flawlessly to provide both bursts of speeding abandon and a miasma of carnal, creepy haze, starting with the spacious, roiling guitars that inaugurate "The Womb".

Personal favorites here included "The Somber (Desolate Winds)", which might be the damned best old school death metal track I've heard from the USA in some time. The riffs have this clinical twist to them, and the vocals echo off in the distance as the guitars lurch into these sober, melancholic dual death/doom melodies. And then they sally forth to tear your ass off again! I love the slow, grooving escalation of "Fleshrot", and the blistering, grinding evil velocity of the track "Fatal Dreams". Frankly, though, I cannot point out a track on the entire album which does not at least deliver some form of festering thrill, not even the horror/ambient interlude "Sleep Sickness". Not even "The Eye of Madness", which manages its 9+ minute girth through a sheen of atmosphere and variation, rather than plod along with the same patterns repeatedly.

Horrendous is hands down amazing, even if I take into consideration that they've basically created a seance here to summon forth all of those traits I hold so dear about the late 80s death metal masterworks that have, in my approximation, yet to be surpassed. For such a young band, they are spot fucking on, they absolutely destroy most of the trendy cavern-core bands out there channeling Autopsy and Incantation, and if this record doesn't stir up the attention it clearly deserves, I might need to start making some house calls.