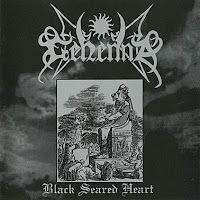 Black Seared Heart is a re-issue of Gehenna's 1993 demo of the same name, with a few bonus tracks to spice up its worth to the band's devoted followers, the only people really likely to mete out the cash for such a collection. I don't always go out for such releases, and there's nothing truly special about this one, but I was honestly a bit surprised by how clear the production of the original demo sounds. There is some redundancy here in several of the tracks, and these early versions are not necessarily any better than later incarnations, but at the very least this actually makes the content AVAILABLE; which it would not otherwise be lest you download a rip of the demo itself; and the added material certainly doesn't harm the value. I should note, though, that you can acquire all of this material on the 2008 re-issue of First Spell (where I'm listening through it), so obviously that would be the preferred, economic choice for the non-collector.

The core demo consists of seven tracks, four of which also appeared on the Ancestor of the Darkly Sky EP the same year, which I reviewed earlier. There is also a brief, burgeoning mid-paced black beast by the name of "Two Demons Eight Spirits", with drudging and direct guitars heavily glossed by the tormented, deep rasping. Nothing much happens here aside from a slight shift in the note progression, and it's quickly understood why this was not included with the EP. The other track here you might not have heard is "The Chariots That Carried Her to the Grave", which drags its boots at a similar pace, but has some synths applied to its mid-section to at least create a broader atmosphere. The additional guitar "Outro I" is quite worthless, and it's clear why "Angelwings and Ravenhearts" was the song the band chose to shift forward to the First Spell EP, since it's easily the most catchy of these.

Moving on, we've got an alternate take on "A Witch is Born" from the Second Spell full-length, as well as another piece, "Night of the Serpent's Judgment", which was retitled "The Mystical Play of Shadows" and appeared in a truncated form on that album. Didn't get much out of these versions, as they seem a little duller due to their production, whereas the album renditions are more bright and energetic. That said, they are pretty clean all around, the former a slower paced floe of churning chords that have a slight Celtic Frost influence, and the latter using keys for a more epic, antique atmosphere, though the guitar riffs in this track are lacking. The final track to round out the compilation is "Midwinter Forest", which pummels along a rather predictable axis of notes and slow blasted drums and sounds more muddled and repressed than anything else here, though the music itself isn't terrible.

About the best I can say for Black Seared Heart is that the demo actually sounds decent by even today's standards for underground recordings, but then, musically they weren't really pushing any boundaries or opening any doors for themselves that their countrymen hadn't already stormed through on their own demos and earlier 'second wave' albums. A lot of the songs are played at a steady rock pace, the riffs are never that enticing, and where they worked out best, they were re-recorded in superior form for an official release. In retrospect, anyone without the First Spell EP can just snap up that Indie Recordings reissue, but if you've got an original copy of that, then there's not really too much added impetus in musical value to pursue this outside of completing your Gehenna collection.