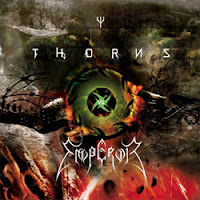 The most exciting and interesting aspect of Thorns vs. Emperor is just how well-integrated its components are. Most split recordings or team-up releases feel segregated due to their traditional formatting. For whatever reasons, geographical or stylistic gulfs, each of the two or more acts will be assigned a 'position' on the track list (CD) or a 'side' if it's being released in vinyl or cassette format. Not the case for this cyber-black extravaganza, which feels more like a collaboration being held directly between Snorre Ruch (billed here as S.W. Krupp) and the members of Emperor. Over the course of 48+ minutes, the two parties deconstruct one another's past glories, their own work, and in some cases, offer up new material.

Granted, not all of the tracks here feel equally revelatory, and I'm quite partial to the Thorns contributions over the Emperor cuts, but this is largely due to the newer material. By this time, Ruch's project had only been heard through demos, so Thorns vs. Emperor was likely its first introduction to the larger underground, and he really delivers. "Melas Khole" is an electronic trudge with poignant, excellent lyrics and shifting industrial percussive currents and swerving bass lines that carry the spikes of dissonant, fragmented black metal licks. "The Discipline of Earth" is a mix of straight black metal bursts and almost drunken narrative over a matrix of whacky, frivolous electro sounds. But "Ærie Descent" is likely the best of his pieces here, a tune that was brought forward and expanded from the Trøndertun demo (1992) and slapped with horns and other atmospherics that truly work themselves upon the listener's conscience. I quite loved the trance-like break at around 1:30, and Satyr from Satyricon does a decent job of slavering this tunes with his hoarse rasp and unnerving, clean vocals.

As for Emperor, they include an martial/industrial intro piece ("Exördium") with deep coils of distorted bass and a gradually building cadence. A crazed deconstruction of their own "I Am the Black Wizards" track known simply as "I Am", which spiritually feels like it inhabits the margin between a Third Reich pep rally and some touring carnival carousel. There is also an entirely instrumental, martial/synthesizer orchestration of "Thus Spake the Nightspirit" called "Thus March the Nightspirit" which feels like the boss battle for some obscure Castlevania or Final Fantasy title. Perhaps more interesting, though, is the metalization of Thorns' "Aerie Descent" which is more compact than the reskinned version Snorre has included. Ihsahn and Samoth have festooned this with lurching, slicing and dissonant riffs that give me the aesthetic impression of attempting to weave through one of those swinging pendulum blade trapped corridors you always see in games or action films.

In return, Snorre has broken down Emperor's "Cosmic Keys to My Creation & Times" into the reductive "Cosmic Keys", taking a few of the guitars and dowsing them in Satyr's spoken word alternative, while a throng of industrial percussion beneath. This was actually my least favorite track on the album, but I'd have to say that the rest of the pieces were quite fascinating to sit through, and though such earlier black metal/industrial experiments do not always hold up for long periods of time, I feel that Thorns vs. Emperor retains some freshness, not unlike those Satyricon electros on their EPs, or Mayhem's "A Bloodsword and a Colder Sun (Part II of II)" from Grand Declaration of War. It's not nearly perfect music, but Thorns and Emperor do prove a near perfect match, and even though the split skews towards the former for its more quality content, this is a collaboration that might have yielded amazing results had they decided to release more.