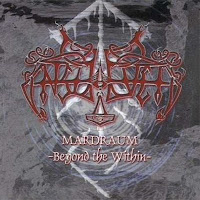 Heavily contrasted to the point at which it often feels scatterbrained, Mardraum: Beyond the Within is perhaps the greatest evolutionary leap Enslaved has taken in their career. It's not the ONLY major shift in their creative tectonics, mind you, but in comparison to the potency and focus of its predecessor (Blodhemn), this almost feels like a different band. You'll recognize the vocals, and perhaps some of the guitar playing, and yes the interesting and introspective marriage of Norse myth and history to an individual philosophy, but otherwise the game is afoot. Ivar and Grutle just took a dive into the deep end, and though they've written far more accessible material later in their career, there would be no turning back from the eclectic circus they have seen fit to ringmaster.

Of course, this album probably arrived at the expense of a segment of their fan base, who mourn the passing of the band's more familiar, Viking/black albums in the mid 90s, but what can we really expect? Enslaved is an intelligent band which seeks stimulation in molding their sound into new patterns, and that's never going to change. They're not likely to write Vikingligr Veldi Parts II through VI, unless they become overburdened with nostalgia, so it's time to get used to the idea, or pack up and move back into the cave. Personally, I am rather happy to have been along for this ride. There have been few bumps in the road, but most of their modern records are nothing short of brilliant. What's startling is that Mardraum features the same personnel as Blodhemn, yet the production feels much more grisly and organic, the songwriting hectic to the point that it feels nearly improvisational in some spots. The proficiency of musicians like Dirge Rep and Ivar Bjornson is put to the test here, not in technicality, but in their ability to fluidly expand themselves.

Mardraum can be jarring, and can be a little difficult to follow along when not in the proper head space. Nonetheless, what I've always enjoyed so much about this is just sticking to a particular guitar line and engaging in the sonic adventure, like the turbulent, arching guitars that penetrate the heart of the broad opener "Større enn Tid - Tyngre enn Natt". This is a 10 minute stretch in which the band throw out all manner of contrasts, from the airy, clean guitar intro, to the more savage, chug-based riffing to the enormous, melodic mid-paced bridge. They've even got some sequences of noisy guitars where the beat drops out completely. In addition to Grutle's familiar rasp, the band incorporates death metal growls throughout this piece for variation, and the final result is a beautiful mess. More disjointed than anything else on the album, but quite intriguing despite itself.

Like it's predecessor, Blodhemn, I found myself attracted to some of the shorter pieces on the album, where a smaller handful of ideas were explored to great effect. Among these are the thrashing, intense volley of "Dandnigekvida (Deadhymn)" with its wild lead, or the warlike churn of the title instrumental "Mardraum (Nightmare)" which involves all manner of raunchy, almost funked out guitars and textured melodies and vocals. Other highlights include "Krigaren eg Ikkje Kjende (Warrior Unknown)" for the soaring bridge vocals, or the harrowing "Stjerneheimen (Starhome)" which features some of the most psychotic and forceful riffing I've ever heard from this band. Any fears that the band might steer too far away from their parent genre are assuaged here, for Mardraum is primarily a pastiche of extreme metal genres, but this is very certainly NOT the more straightforward, structured entity of years flown by.

If there's a complaint here, it's that the explosive level of rhythmic chops and ideas on the album are often too much meat for its skeletal framework. I mentioned before that it's a beautiful mess, but I was partially lying: this is ugly as sin. Most of the catchier moments come strictly through the clean vocals, as many of the constantly mutating, colliding riffs are dissonant and unfriendly. This is not an album like Below the Lights or Vertebrae in which you can soothe yourself, but more a whirlwind of primordial chaos which spawns ideas. We've all heard crazier, I'm sure, but not from Enslaved. The lyrics rule, and I really liked the choice of raw production, the crashing bass tones and the intense drumming. It really fits the aimless anxiety of the composition, and ensures that once again, these Norwegians have produced a rather unique product that they themselves would not even be repeating, a thriving if dizzying monument to strength and entropy.